Westland Row brings up the hat-trick 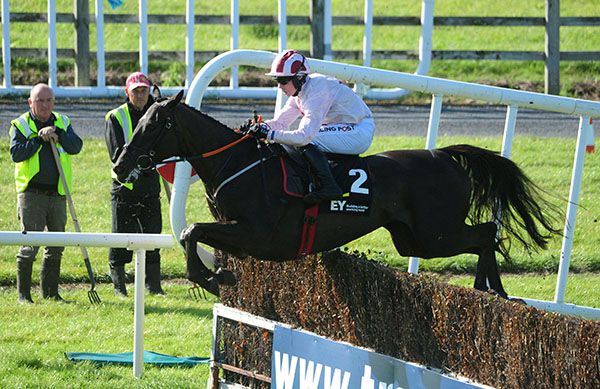 Westland Row in charge over the last
© Photo Healy Racing

Westland Row brought up his hat-trick in an eventful EY Chase at Tramore.

The even-money-favourite Pylonthepressure fell at the third fence when leading and hampered Forza Milan causing Ricky Doyle to be unseated.

The latter was almost on terms at the second last, however Westland Row (6/4) readily asserted upon landing and wasn't extended in winning by five lengths from the 20/1 shot.

Gordon Elliott said: "We were lucky and that (luck) is the name of the game. We had a horse (Barra) fall at the final fence at Kilbeggan when he was going to win the Midlands National so it goes around.

"We got handed a race today but we'll take them any way we get them. We got there a bit soon as the plan was to get there going to the last but what could we do!

"Six weeks ago if you told me he'd win three in a row I'd have laughed at you but he is after winning a few nice pots now so it's great. He's probably better over hurdles as he jumps better and we'll mix and match with him now in whatever he qualifies for."

Westland Row's hat-trick comprised a beginners' chase in Kilbeggan and a hurdle race at the same venue.