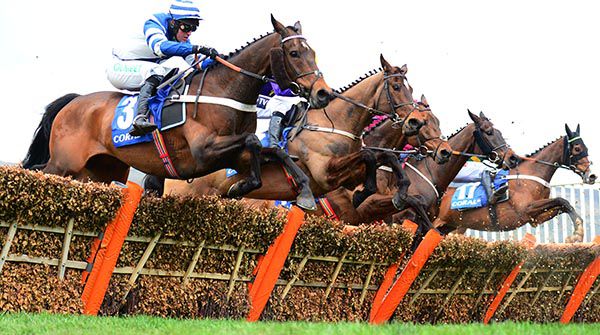 William Henry came from the clouds to deny top-weight Wicklow Brave in the Coral Cup at Cheltenham.

Nicky Henderson’s nine-year-old had only been seen once this year, being pulled up at Wincanton on Boxing Day and subsequently undergoing surgery on his wind.

Sent off a relatively unconsidered 28-1 chance, Nico de Boinville looked to have a mountain to climb turning into the straight as he battled to better his fourth in the race 12 months ago.

It was Paul Nicholls’ Brio Conti who looked to be going better than anything, but then Patrick Mullins appeared on the scene on Wicklow Brave, a former Irish St Leger winner and Grade One-winning hurdler.

Just as Willie Mullins looked set to notch his third win of the week, William Henry began to charge home and won by a short head, with Ballyandy battling on for third and Brio Conti fading into fourth.

After seconds in the first two races for Henderson with Champ and Santini he registered a winner from an unlikely source.

The Seven Barrows trainer said: “He is funny as he doesn’t really like Cheltenham, but he actually ran very well in it last year. He just tends to do everything going right, which is not ideal.

“We started the day with a couple of seconds and when you get that close you think three seconds would not be fair, but he just about got there.

“He was always out the back and I was watching Burbank and Apple’s Shakira and I thought he was too far back. It was a great ride as he is not the easiest to ride. I just thought it might be too soft for him.

“He really has to go right-handed. We ran him over fences here first time and by the second he was out near the car park!

“We had to revert him to hurdles, but if they win races like that you don’t mind. He gives Dai (Walters, owner) a lot of pleasure as he was named after his father.”