Wintry scene but a winner to remember for O'Hanlon 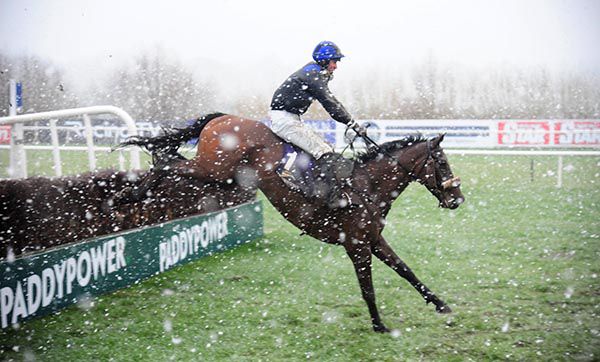 There was quite the scene for the Adare Manor Opportunity Handicap Chase as Leopardstown's penultimate event was run off in a shower or sleet and snow. It's a race Paddy O'Hanlon won't forget in a hurry as he rode his first winner over jumps and his second overall aboard Amaulino (14/1).

It's been a great few days for County Armagh handler Keith Watson, as he also scored a Clonmel success on Thursday with Frankly All Talk.

Amaulino, on his fourth start for the Watsons, asserted away from the last to see off fellow northern raider School Lane by eight and a half lengths.

“His jumping was serious and I just let him creep his way into the race. He winged the second last and he took off up the straight," said O'Hanlon.

“That’s my first ride over fences. I rode a winner on the Flat and then I went over to Karl Burke for a while. I’m back with Dermot McLoughlin now who gave me my first winner.

“To ride a winner around a chase track like that on my first ride over fences is unbelievable.”

The Stewards received a report from Mr. W. Flemming, Irish Horseracing Regulatory Board Clerk of the Scales, regarding the fact that Sarah Kavanagh, rider of Miss Titanic had presented herself to weigh out at 2 lbs overweight, which was not declared. Evidence was heard from the rider concerned. Having considered the evidence, the Stewards allowed the overweight having consulted with R.K. Watson, trainer of Miss Titanic, but were satisfied that Sarah Kavanagh was in breach of Rule 198(vii) and having considered her previous record in this regard, they issued a fine of €150.

The Stewards fined R. K. Watson, trainer, €65 for failing to fit the declared head gear to Miss Titanic, prior to entering the parade ring.