Youngster Eclair a horse on the improve for Gigginstown and Elliott 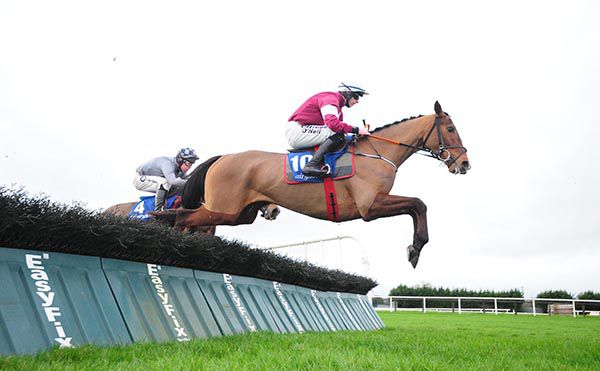 His Grotesque and Ticket To Ride didn't come up to the mark in the first two contests but Gordon Elliott struck in race three at Fairyhouse, the Buy Your Great Value Annual Fairyhouse Membership Rated Hurdle, with Eclair De Beaufeu (100/30). Oscars Den (14s into 11s) took them along here in front for Ted and Ruby Walsh but in the words of winning rider Jack Kennedy Eclair De Beaufeu "picked up well when we turned into the straight."

One of the youngest in the line-up at five, the Gigginstown House Stud-owned victor was soon gone beyond recall and he triumphed by five lengths from the aforementioned pace-setter.

Well-backed favourite Try Again could never get to grips with those up front and he ended up a neck off Oscars Den in third place.

“I'd say he's improving the whole time. I like the way he quickened from the home turn,” reflected Elliott in the aftermath.

“Jack made plenty of use of him as he stays well. I'm very happy with him.

“I think he'd even be better over further as he wouldn't have to force it as much.

“He's been busy enough so we might freshen him up.”

A.E. Lynch, rider of Capital Force trained by Henry de Bromhead, reported to the Clerk of Scales that his mount stopped quickly.

The Stewards interviewed Henry de Bromhead, trainer, in relation to the late arrival of both Capital Force(Ire) and Or Jaune De Somoza (Fr) into the parade ring.

Evidence was heard from the trainer concerned, who stated that both animals were weighed out at 13.43 and 13.44 respectively and were subsequently tacked without delay.

He added that a tongue tie was fitted to Capital Force which may have slightly delayed proceedings, but felt the short gap between races was also a contributing factor.

Having considered the evidence, the Stewards cautioned Mr De Bromhead under the provisions of Rule 32(ii).