Yuften lands yet another claimer 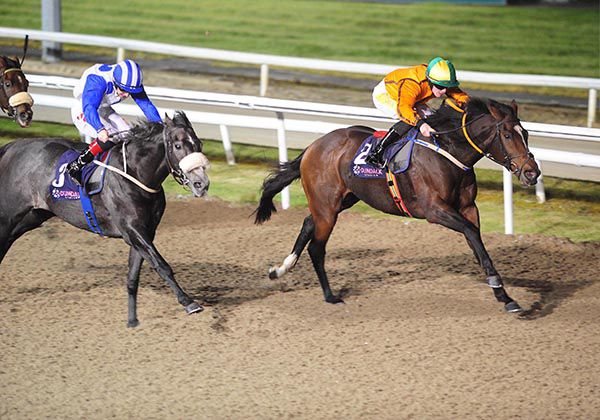 The Denis Hogan trained Yuften registered his eighth career success, as he justified favouritism in the Dundalk Stadium Claiming Race.

The eight-year-old gelding was recording his sixth success in races of this type, having being claimed by James McAuley after winning at Bellewstown in July.

Placed four times from seven starts since that Bellewstown win, the son of Invincible Spirit was expected to deliver this evening and was sent off the 15/8 favourite.

Settled towards rear by Joey Sheridan, he was ridden from early in the straight and soon made good progress on the inner.

He came with his challenge over a furlong from home and edged to the front in the closing stages, going on to score by half a length.

Merrincourt (5/2), who travelled best from the two furlong pole, had to settle for second under Colin Keane for Ger Lyons, while Master Speaker (5/1) was a further three lengths back in third.

"He was back to his own trip and in a race that's his grade," said Sheridan.

"I just rode him like the best horse in the race and thankfully it worked out.

"The lads got him for handy enough money and he's paid his way so far. He was actually seventh in the Irish Cambrigdeshire and he'll pay his way."

N.M. Crosse, rider of Garryowen (GB) trained by R.P.Cody, reported to the Clerk of the Scales that his mount hung left in the straight.