Zero Ten in charge at Ballybrit 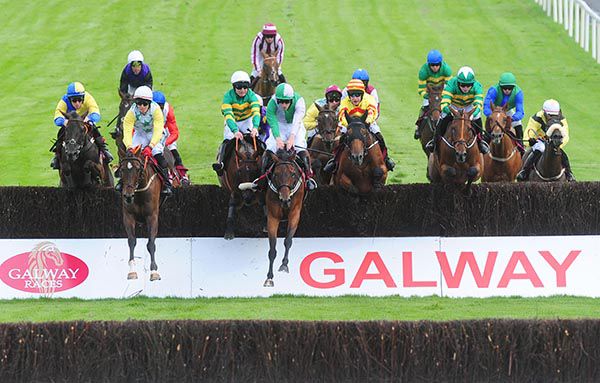 Emmet Mullins' Zero Ten looked the class act in the Latin Quarter Beginners Chase and so it proved as he drew three lengths clear.

The former point-to-point winner has been in cracking form for Mullins having landed a bumper and three hurdle races including the Connolly´s Red Mills EBF Auction Hurdle Final at Punchestown in May.

Punters liked what they saw and sent him off the 1/2 favourite.

He faced a battle, though, as Hero's Welcome challenged him off the home turn. However, once Zero Ten straightened he readily asserted and stayed on strongly to score. Stormey chased him in at 25/1 and he was three and three quarter lengths ahead of 33/1 shot Charlie Stout

Emmet Mullins said: "You have to have a big engine to be able to win these races that he’s winning. He’s very well balanced. He’s on the ball. He’s clever. He was a bit cautious at a few of the fences but his first run over fences, you’d expect that. He’s safe enough, he’s very aware of what’s going around him. He’s a bit special.

"You’d usually be happy enough if you won your beginners' around Galway. We’re not sure what’s going to come next. It’s great to get the novice chase campaign off to a winning start and hopefully can keep going in the same vein of form as we did last year.”

The Stewards interviewed P.E. Corbett, rider of Charlie Stout, concerning his use of the whip in the latter stages of this race. Evidence was heard from the rider concerned. Having viewed a recording of the race and considered the evidence the Stewards were of the opinion that P.E. Corbett was in breach of R10(3)(g) by using his whip with excessive frequency. Having taken his previous record into consideration, the Stewards suspended P.E. Corbett for two race days.