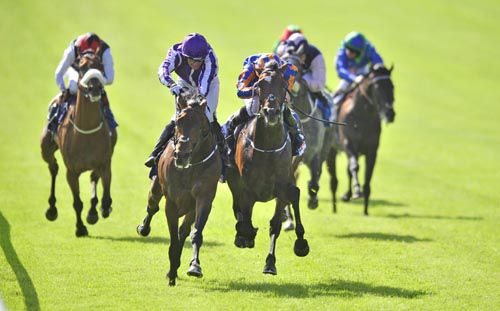 < Diamondsandrubies ran out a gutsy winner from the front to land the Sea The Stars Pretty Polly Stakes at the Curragh.

Seamie Heffernan looked a sitting duck on the Aidan O'Brien-trained 8-1 chance as first Ribbons and then Legatissimo made strong late charges.

The line came in time for Diamondsandrubies, though, as she just held on to beat Legatissimo by a short head.

O'Brien and Heffernan made it a double when Bondi Beach (7-1) took the At The Races Curragh Cup.

O'Brien's two three-year-olds swept past favourite Forgotten Rules over a furlong out and it was Heffernan who got the verdict over Ryan Moore on Order Of St George winning by a short head.

Moore had already bagged a double, culminating in Most Beautiful s win in the Grangecon Stud Stakes.

David Wachman's filly was sent off the 11-8 favourite and tracked the pacesetting Miss Elizabeth before striking the front over a furlong out and running on well to fend off the finish of Only Mine by three-quarters of a length.

Moore earlier struck when Air Pilot justified 8-15 favouritism with an accomplished display from the front in the Hermitage Medical Clinic International Stakes.

Ralph Beckett's charge was off the bridle earlier than his two rivals, but he kept finding more for Moore's urgings to beat Parish Hall by a length and a quarter.

While the market for the Barronstown Stud EBF Maiden spoke in favour of a pair of O'Brien runners, it was Jim Bolger who took the spoils with Sanus Per Aquam

The 7-1 chance was always to the fore under Kevin Manning and saw the trip out best to beat O'Brien's well-backed Lieutenant General by a length and a quarter, with Ballydoyle's market leader Shogun a disappointment.

Michael Wigham's Foxy Forever (20-1) made every yard under Colm O'Donohue to land the Tote Rockingham Handicap, while Sabrina Harty's Have A Nice Day (8-1) landed the Sunday Independent Handicap under Leigh Roche.

James Ferguson is finding it difficult to split Deauville Legend and El Bodegon ahead of the Sky Bet Great Voltigeur Stakes at York on Wednesday.

Irish fillies over in force for Yorkshire Oaks

A strong Irish-trained challenge on the Darley Yorkshire Oaks is in prospect at York on Thursday.

Cheltenham to cap Festival attendances in 2023

Spectator capacity at Cheltenham will be capped at 68,500 people per day for the four days of the 2023 Festival in a move to enhance the experience of racegoers attending, the Jockey Club has announced.