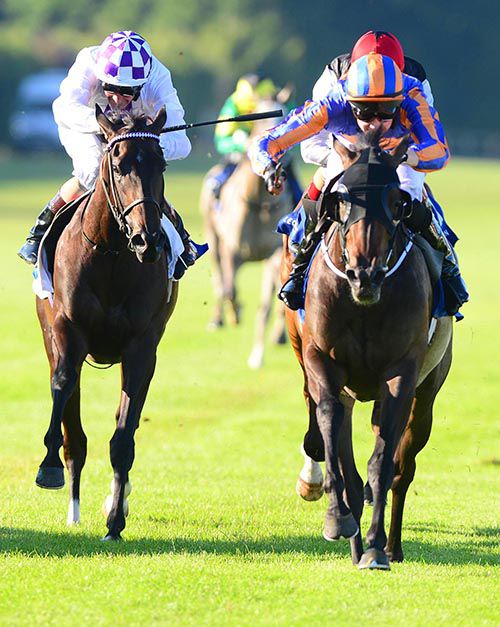 The application of a visor worked the oracle for Wonderfully (13-8 favourite) in the Silver Flash Stakes at Leopardstown.

Seventh in the Albany Stakes, which is beginning to work out really well, Aidan O'Brien's sister to Mars was bounced into a lead from the outset by Joseph O'Brien.

She stretched clear halfway down the straight and had enough in the tank to hold off the late thrust of stable companion Perhaps by a length.

Irish St Leger hero Royal Diamond regained the winning thread to give Johnny Murtagh his first Listed success as a trainer in the Challenge Stakes.

Also ridden by Murtagh, the 5-4 market leader skipped clear of his rivals some way from home, but the positive tactics never looked like failing and he was pushed out to cross the line with three and three-quarter lengths in hand of Sir Ector

O'Brien's Geoffrey Chaucer (2-7), a Montjeu half-brother to Shamardal, landed the odds from the front on his debut in the Irish Stallion Frams EBF Maiden, but he had to work a bit harder than expected and only held off the challenge of Tarfasha by a rapidly-diminishing neck.

O'Brien jnr tried to repeat the feat by leading on Il Palazzo and she looked the most likely winner of the Discover Ireland Dublin Horse Show Maiden halfway down the straight, but she was thwarted by another Coolmore representative as the David Wachman-trained Goddess Of Love (7-1) swooped by to score by three-quarters of a length.

Not be outdone by her brother, Ana O'Brien got on the scoresheet as Fairylike (4-1) completed a treble on the night for the Ballydoyle operation in the "Hot House Flowers" Apprentice Handicap.

There was a big prize up for grabs in the Irish Stallion Farms EBF "Nasrullah" Handicap and it went the way of Dermot Weld's Tandem (6-1).