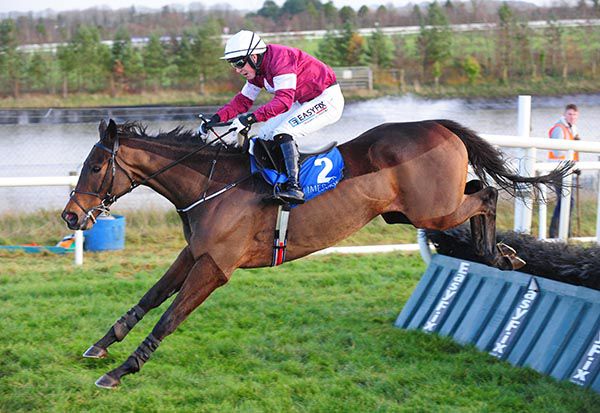 Aforementioned has the race in the bag
© Photo Healy Racing

Aforementioned proved too strong for Free Ranger at the business end of the two mile maiden hurdle in Limerick.

Evan Daly's mount tacked onto Free Ranger sweeping the home turn and the pair drew clear by the second-last.

Aforementioned got on terms at that flight and was soon pushed along to take over a length out of Free Ranger approaching the last.

He popped that one well and won going away by five and a half lengths to justify 6/5 favouritism for Joseph O'Brien and Gigginstown.

Free Ranger was beaten five and a half lengths into second with Ilikedwayurthinkin another three lengths adrift in third at 10/1.

Evan Daly said: "He did it well and was entitled to do that on his first run over hurdles at Navan last season when he finished third in a decent maiden hurdle.

"He should come on plenty as he is still a raw horse. He should get better in time and with more experience as well."