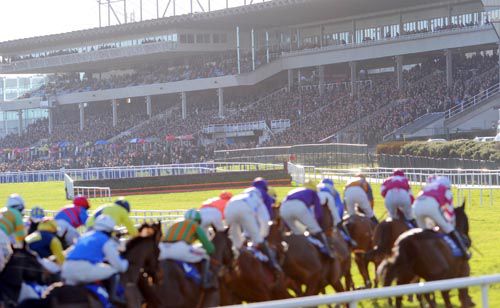 Horse Racing Ireland (HRI) today announced a number of enhancements to the Irish Flat Pattern race programme for the 2014 season.

The full Black Type race programme for Irish Champions Weekend, which will see the Solonaway Stakes (8 furlongs, 3yo+) upgraded from Group 3 to Group 2 status, has now been formally approved by the European Pattern Committee.

Additionally, the Curragh will stage a two-day Irish Champions Weekend Trials meeting on Saturday/Sunday 23rd/24th August featuring the Group 2 Debutante (7f 2yo Fillies) and Futurity (7f 2yo), along with the Group 3 Renaissance (6f 3yo+), Royal Whip (10f 3yo+) and Ballycullen (14f 3yo+).

Confirming the Pattern race programme for Irish Champions Weekend, HRI's Director of Racing Jason Morris commented: "HRI is delighted to have secured European agreement for our proposed schedule of races for Irish Champions Weekend, including the promotion of the Solonaway Stakes to Group 2 status. This two-day meeting will be a fantastic highlight of the Flat racing season, not just within Ireland but also in Europe and indeed globally, given the quality of races that will be staged and the provision of top-class opportunities over the full spectrum of ages and distances. We look forward to welcoming the world's leading horses, owners, trainers and jockeys to what will be two magnificent days of sporting competition."

Other Pattern Race Changes for 2014

The following Irish Pattern race changes have also been approved by the European Pattern Committee for 2014:

Upgrade from Listed to Group 3

This race is ideally positioned in the calendar to provide a Group race opportunity for Irish stayers 3½ weeks before Royal Ascot. It is a well-deserved first Group 3 race for Navan, which will also be staging the Group 3 Ballysax Stakes (3yo 10f) on 12th April in 2014, the race being transferred from Leopardstown for one year only for calendar reasons.

Downgrade from Group 2 to 3

Regrettably the Derrinstown Derby Trial (3yo 10f) failed to meet the rating parameter required for a Group 2 race for the fourth consecutive year and the race is therefore automatically downgraded under the European Pattern Committee Ground Rules.

The new 6f Listed race at Naas provides the first opportunity for 3yo sprinters to compete within their own age category for Black Type in Ireland and it will augment an already very strong card at Naas which includes three other Listed races.

The Killarney race will be a new feature event at their very popular Summer Festival and it will be another welcome addition to the Irish Black Type programme for fillies and mares, which HRI has significantly enhanced in recent years.

"Form is temporary and class is permanent” was trainer Ado McGuinness' summation of Bowerman today, as his nine year old returned to form with an 11th win in Dundalk's Floodlit Friday Nights At Dundalk Handicap.

Halford off the mark with new club as Lee doubles up

Doctor Grace (5/2) was trainer Michael Halford's first win for the Dundalk Racing Club today, getting off the mark at their local course, in the Book Online @ DundalkStadium.com Handicap