Atomic Jones successful on debut in a thriller 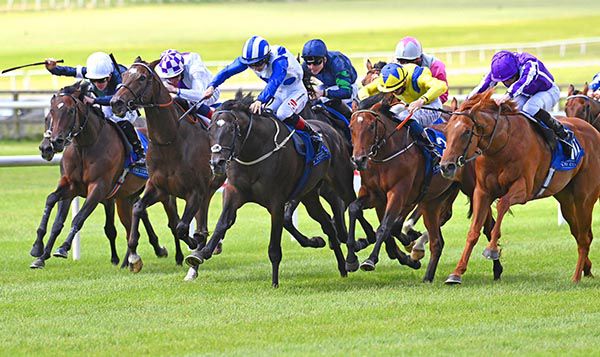 Day three of the Dubai Duty Free Irish Derby Festival at the Curragh got off to a cracking start with Atomic Jones just coming out on top at odds of 11/2 after a thrilling finish to the Barronstown Stud Irish EBF (C&G) Maiden.

The Ger Lyons-trained newcomer was ridden to challenge a furlong out by Colin Keane and just held on in a blanket finish with distances of short-head, nose, and two heads separating the first five home saying it all.

The unlucky loser certainly appeared to be Point Gellibrand, who was denied a clear run until squeezing through a gap inside the final 100 yards and would have been up in another stride.

Shark Bay and Chicago Soldier both came home well in third and fourth, while 3/1 favourite Manu Et Corde was prominent throughout and kept on gamely in fifth.

Lyons' brother and assistant trainer Shane said, "We're very happy with him, he's a big raw horse and he came here to have a day out and to improve.

“Obviously he has ability to be able to do that. Colin said he loved the ground and he'll be a lovely horse over a trip next year.

“He's called after a Tom Jones song, not Sean Jones (part-owner) as some of the lads on telly were saying.

“He's a fine big horse and like one of ours he will improve so we'll take it from there.”