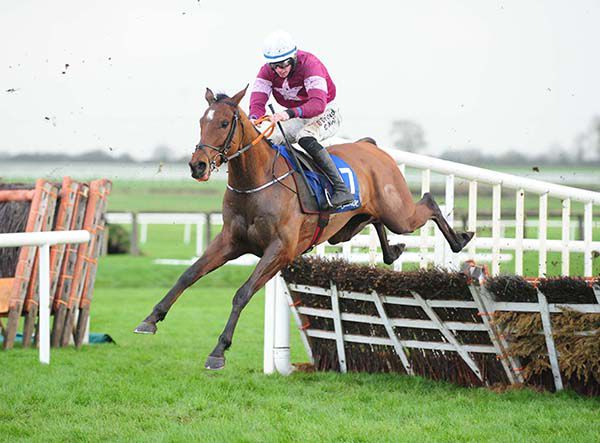 Gordon Elliott and Jack Kennedy completed a 1,574/1 treble on the day as Authorizo made an impressive jumping debut in division two of the Free Racecourse Wifi At Fairyhouse Maiden Hurdle.

The French import was supported on track from 6/1 into 4/1 and that confidence proved right on the mark as the Gigginstown-owned four-year-old travelled well to lead two out.

He drew clear before the last and stayed on strongly to beat Sky Marshal, who kept on well after a mistake at the penultimate flight, by six and a half lengths.

The evens favourite Raya Time was unable to find any extra at the business end finishing another five lengths back in third.

Elliott said, “He's a nice horse. He didn't show us a whole lot at home but he was good there. Jack said he was a bit keen early but the further he went the better he was. He put it to bed well and Jack was impressed with him.

“We're not sure where we'll go now but he'll be entered in all the races at Cheltenham and we'll see what happens.”

Elliott and Kennedy also teamed up to land division one with Chosen Mate, while 20/1 shot Kayf Thou initiated the treble in the 3m1f handicap chase.

There has been 7mm of rain at Wexford overnight with the going now good, good to yielding in places.