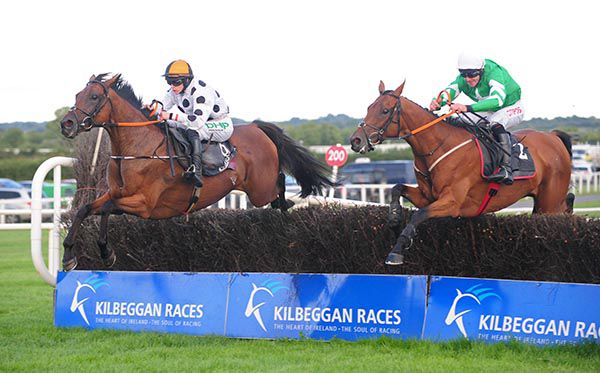 Rachael Blackmore is blazing a trail at the head of the jump jockeys’ table and she teamed up with Henry de Bromhead for another double at Kilbeggan as Abbey Magic landed the Michael Moore Car Sales Mercedes Benz Beginners Chase.

Blackmore has now gained half of her 32 wins this term on de Bromhead-trained horses, and she was seen to good effect again on this lightly-raced mare who previously won twice over hurdles for John Berry.

Available at 9/1 this morning and further supported on track from 9/2 into 7/2, the mare overcame an absence of nearly nine months to score on her first outing for de Bromhead.

Its All Guesswork threw down a strong challenge at the last and Blackmore, who lost an iron after a slight mistake at the last, kicked out her other iron and did really well to get the daughter of Beneficial home by half a length.

De Bromhead said, “That’s a bit of a surprise and we only got her a couple of months ago. She’s a lovely mare and jumps brilliant. I thought she’d need the run and she did as she took a good blow but was able to keep going.

“It’s our first winner for the Halleys (Gerry and Debbie) who are very old family friends and neighbours of ours.

“I’ve no real plan as I genuinely thought she would need the run today.”

This completed a 19/1 plus double for Blackmore and de Bromhead who earlier teamed up to score with another 7/2 chance Sir Benford Wales in the maiden hurdle.