Bucket makes it 10 at Dundalk as Crosse doubles-up 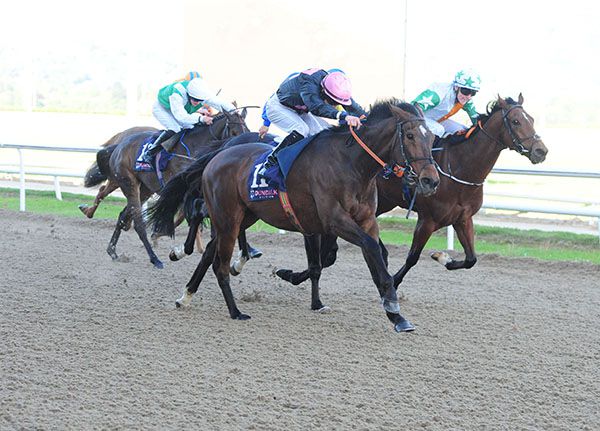 The admirable Shake The Bucket recorded his tenth win at Dundalk in the AV Direct Apprentice Handicap, providing his rider Nathan Crosse with a quick double on the card.

Now a twelve-year-old, the Niall Madden trained bay won his first race at the venue way back in October of 2011, and was last successful here in November of 2017.

Sent off a 16/1 chance this evening, the son of Ashkalani was settled behind the leaders, and was fourth at the halfway stage.

He came with his effort on the outer with over a furlong to go, and edged to the front in the closing stages, going on to hold off the late effort of Royal Admiral by half a length.

Crosse said afterwards: "He's some servant! Tom (Madden) usually rides him and he rang me this evening and told me to let down on him.

"Tom would do a lot of work on him and I was just delighted to sit on him and get the 10th win (here).

"He's as gutsy and hard for his age and all the miles he has done. He tries every step of the way."

* The Stewards interviewed Amy O'Hanlon, rider of Spanish Dawn, concerning her use of the whip in the latter stages of this race. Evidence was heard from the rider concerned. Having viewed a recording of the race and considered the evidence the Stewards found the rider in breach of Reg. 10. 3. (b) by using her whip unnecessarily when her chance had gone and having taken her record into account cautioned her.

* S.M. Crosse, rider of Exclusive Waters, trained by Garvan Donnelly, reported to the Stewards' Secretaries that his mount stood when the stalls opened, losing ground.

* At the request of the Stewards, Amy O'Hanlon, rider of Spanish Dawn, trained by John C. McConnell, reported to the Stewards' Secretaries that her mount stood when the stalls opened, losing ground.