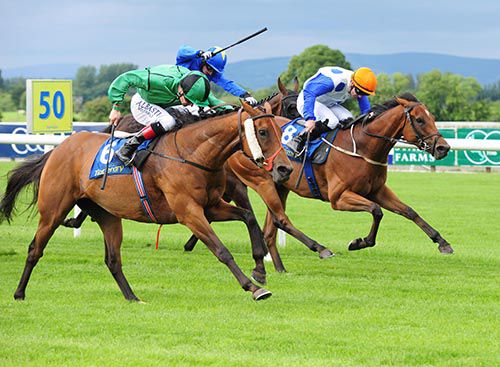 The Harry Rogers trained Byron Beauty landed some nice bets, as she got up close home to win the opener at Tipperary, the McGrath Oil Claiming Race.

Without a win in twenty-six starts before today (was placed ten times), the eight-year-old daughter of Byron was available at 25/1 this morning, opening on-course at 16's, before going off an 11/1 chance.

Settled towards rear by Pat Smullen, she made good progress on the outer approaching the straight. She was ridden to challenge with over a furlong to go, and hit the front in the closing stages, going on to prevail by a short head.

Harvey Specter (4/1) had to settle for second second under Gary Carroll for Ger Lyons, while My Painter (7/1) was a length and a half back for trainer/rider Denis Hogan.

The Ice Meister was sent off the 5/2 favourite (from 3's) and he finished a further half a length back in fourth Colin Keane for Ger Lyons.

Rogers, who lost seven time winner Giant's Quest at Leopardstown yesterday, said afterwards: "That was a long time coming. She has ability but getting her to do it is the problem and I thought she was done at the line."