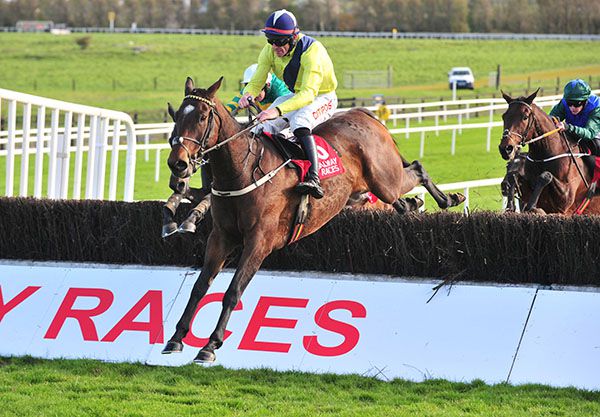 Barry Connell today reported he must now wait until the spring before being issued a trainers' license as the enthusiastic owner sent out Mount Pelier to an impressive win in the Sanserv Rated Novices Chase at Galway, scoring for official trainer Keith Clarke.

The six year old gelding today made a fine return to action when winning on chase debut for jockey Davy Russell, making most when comfortably beating Fine Brunello by 13 lengths.

Connell, a major investor in the industry, appeared a little frustrated by licensing issues and while he did not wish to comment on the process, did later say “I'm just enjoying the fact the horse won today and whenever the course comes up I'll do it. Hopefully I will get the license and take it from there.”

“It is unfortunate but they (IHRB) are going to have the next trainers' course in the spring. I think it is the first time ever that they didn't have more than one course in the year.

“One was held last spring but the autumn course was cancelled as a minimum of ten people was required to hold the course.”

Regarding Mount Pelier, Connell, representing absent trainer Keith Clarke, added “we expected that as these were only summer horses and he is a proper winter horse. He had been to a schooling hurdle in Tipperary and ran well there and is improving all the time.

“He is class (to jump) and loves jumping. He was getting all the allowances there so you wouldn't want to get carried away, but he is worth an entry in the Craddockstown Chase, over two miles, and the 2m4f Florida Pearl Chase. If he is not good enough we can drop him back down again but I couldn't have been happier there.

Regarding trainers' licenses, it is notable derogations are routinely issued upon the death of a trainer whose license is then temporarily handed to a family member. However in the instance of a prospective trainer seeking to set up afresh and invest in the industry, the IHRB refuses to issue 'provisional' licenses.

This has led to unsatisfactory outcomes, most notably when Champion Flat Trainer Aidan O'Brien was credited with training 2016 Triumph Hurdle winner Ivanovich Gorbatov, which was prepared by his son Joseph O'Brien but who did not possess the necessary paper work at the time.