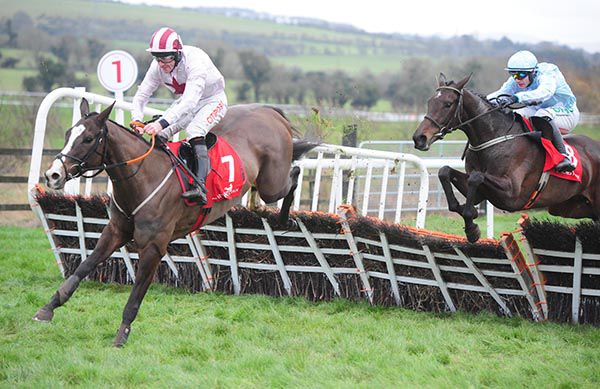 There was a thrilling finish to the Free Trial At racingtv.com/freetrial Mares Maiden Hurdle, with French import Elfile just getting the better of market rival Black Tears.

Successful in two AQPS races in her native land, the Willie Mullins trained victor hadn't run since November of 2017.

As short as 5/4 in early shows, the daughter of Saint Des Saints eventually went off an 11/4 chance having opened on-course at 3s.

Pushed along in fourth from two out by Paul Townend, she soon improved into second and was ridden to challenge from the last.

A great tussle ensued from there, with just a short head separating the market principals at the line.

The Davy Russell ridden runner-up, who was returned the 6/5 favourite, blunder over the second last, and that certainly didn't help her cause.

Mullins said afterwards: "She had some nice form in France but she wasn't exactly showing off her form. We didn't come here full of confidence but she seems a natural jumper, and I'd say that's her trip and maybe softer ground.

"I think she'll improve and as I keep saying a lot of our maidens are a bit behind where they could be. We'll stick to that trip for the time being and she could go further in time.

"That's our first winner for Mr Alexander, and he has a number of nice mares in training."

* Under the provisions of Rule 90, the Stewards allowed Pleasant Hill, trained by L.Young, to run on receipt of the trainer's written assurance that the error identified in the certification of vaccinations would be corrected in accordance with Rule 91 within the timeframe specified.