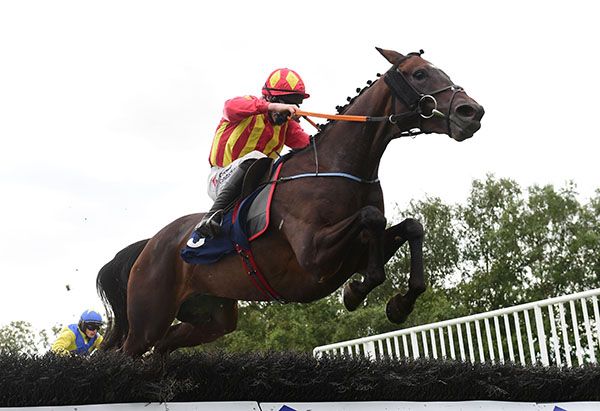 Her only previous win came in a point-to-point last November when trained by Graham McKeever, but she had been knocking on the door of late and finished second over the course and distance on her most recent start.

Sent off a 3/1 chance this afternoon, the daughter of Kalanisi raced mainly in fifth and still had a bit to do in third before the final flight.

Soon ridden, she came with her challenge in the centre of the track, keeping on best to lead close home, with a neck the margin of victory.

The front-running Gibbet Hill was the one cruelly denied, with JJ Slevin aboard this Tony Black trained 25/1 chance. Menindee (16/5) was just a short head away in third, while the well-backed Rubiana (9/2 into 11/4 favouritism) was a disappointing ninth.

"Jack is riding out of his skin and gave her a great ride. She didn't travel great early and was flat out the whole way. He was strong as an ox and just got her up," Elliott said.

"It's great for the syndicate (Lakeside Racing) and they'll have a bit of fun with her.

"She's one we'll mix and match (over hurdles and fences) and she might even go over to England before the summer is out as well."

The Irish Horseracing Regulatory Board Veterinary Officer examined Rubiana, trained by Gavin Cromwell, at the request of the Stewards and reported the animal to be blowing hard post race.

The Stewards interviewed J.J. Slevin, rider of Gibbet Hill, concerning his use of the whip in the latter stages of this race. Evidence was heard from the rider concerned. In his evidence, J.J. Slevin accepted that he had exceeded the whip guidelines. Having viewed a recording of the race and considered the evidence the Stewards were of the opinion that J.J. Slevin was in breach of R10(3)(g) by using his whip with excessive frequency. Having taken his previous record into consideration, the Stewards suspended J.J. Slevin for two racedays .