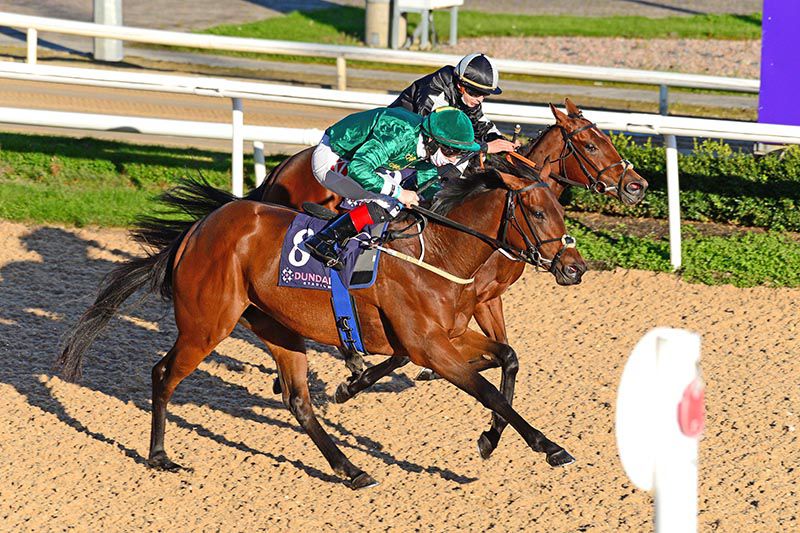 Frenetic defied her wide draw to get up close home and claim the Legacy Stakes at Dundalk, recording a quick double on the card for trainer Ger Lyons.

Colin Keane was on board this time and his mount was quickly away from stall 15 in the Listed contest over five furlongs.

The Kodiac filly was soon on the girth of front-runner Giselles Thunder and was asked to tackle her rival over a furlong out.

Frenetic, sent off 3/1 favourite, got on top close home despite running around under pressure to record a neck success.

The winner was bouncing back to form after a disappointing effort in the Flying Childers at Doncaster last time.

Shane Lyons said:- “She's very fast and is probably the fastest two-year-old over five that's ran in the country so far.

“You can wipe out the last day when she had to travel over to Doncaster. There was wind in her face and it was a horrible day.

“She was buzzy with William (Buick) and he said she did too much early doors but today she nice and relaxed.

“I said to Colin beforehand that she was nice and quiet today and that's the way to have her and we'll be able to ride her today.

“To do that from 15, to get over, was a tough ask. There is still a bit of improvement in her as she was green in the last 150 yards, wandering about.

“She's in the Mercury but Ger will peak to Ed Sackville, racing manager for the owners, to see if we will stop now and train her for next year.

“We were delighted with that and she's done nothing wrong all year. There were excuses for a couple of her runs and when she got beat in Naas she was beaten by a proper horse of Ken Condon's (Miss Amulet).”

The win moved Colin Keane one ahead in the jockey's title race.

Alpinista wins another Group One in Germany

Sir Mark Prescott’s prolific filly Alpinista doubled her Group One tally with a decisive victory in the Preis von Europa at Cologne.

Following 4mm of rain and selective watering, the ground at Roscommon remains good for today's seven-race jumps card which starts at 1.20pm.