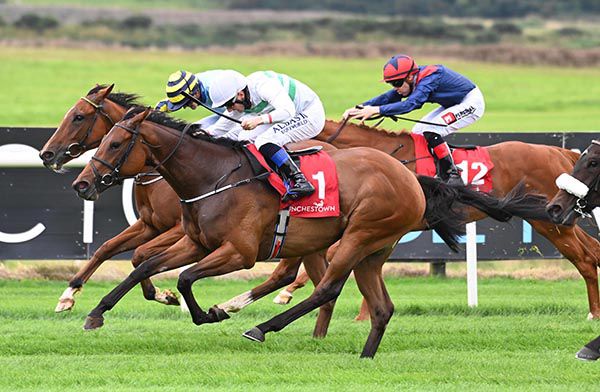 Alizarine, the Galway winner that never was, made the breakthrough in the opener at Punchestown this afternoon, the Irish Stallion Farms EBF Fillies Maiden.

The Jessica Harrington trained juvenile was thought to have won at Galway in July, but it was her stable companion, Aurora Princess, who mistakenly ran in her place.

A well-beaten tenth on debut at Leopardstown last month, the daughter of Sea The Moon was sent off at 11/2 this afternoon (from 8s).

Settled behind the leaders by Chris Hayes, the Kirsten Rausing owned bay took closer order on the outer as they approached the straight.

Ridden over a furlong from home she was soon hampered but quickly recovered and kept on best in the closing stages, getting up close home to prevail by a neck.

Esculenta (7/1) was the one just denied, with Ben Coen aboard this Johnny Murtagh trained bay.

Radiyka (10/3jfav) was another neck back in third. She too was hampered but finished strongly under Oisin Orr.

Perfect Thunder, who was the other joint-favourite, was the one who hampered the first and third. She veered left from over a furlong out and eventually finished fifth under Shane Crosse.

"She would have been unlucky not to win. She was coming with a lovely run and Chris said she would probably have won easy (but for the interference)," said Harrington.

"She was good there. She had some fancy entries and I've always thought a lot of her.

"We'll try and find one of those back end listed or Group 3 races for her. I'd love to step her up to a mile as well."

C.D. Hayes, rider of Alizarine (GB) trained by Mrs John Harrington, reported to the Clerk of Scales that his mount was hampered one and a half furlongs from the finish.

S.M. Crosse, rider of Perfect Thunder (GB) trained by Joseph Patrick O'Brien, reported to the Clerk of Scales that his mount hung badly left in the straight.

Ferny Hollow ruled out for the season

Ferny Hollow has been ruled out of the Sporting Life Arkle Trophy at the Cheltenham Festival.

The well touted Mercurey powered clear inside the final furlong to make an impressive debut for Willie Mullins in the concluding bumper at Gowran Park this afternoon.

Two men banned for 10 years in Britain for doping horse

Two men have been banned from racing for 10 years at an independent disciplinary panel hearing of the British Horseracing Authority over the alleged doping of Ladies First at Newcastle in September 2018.

Coeur Sublime quickened away impressively to justify his short price in the Daly Farrell Accountants Beginners Chase at Gowran Park.