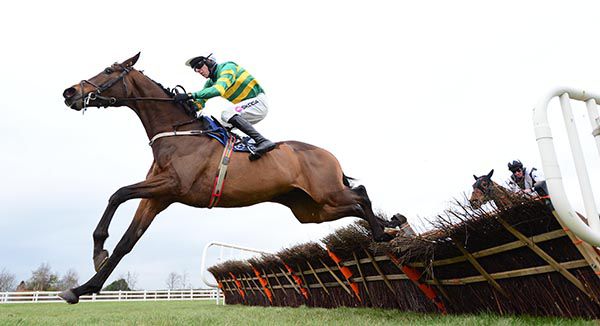 The French import five year old was returning from a 460 days absence on Irish debut today and comfortably defeated runner-up Don Diablo by four and a half lengths.

Paddy Power bookmakers subsequently left Gentleman de Mee unchanged at 33/1 for the Supreme Novices Hurdle at Cheltenham in March although afterwards winning trainer Willie Mullins reported “he’s in the Supreme and the Ballymore, and to me he’d be looking more like a Ballymore horse. I’ll see what connections want to do but I think he’ll improve as he goes up in trip.”

He added “he had a setback early in the season so I hadn’t as much done as I would like to have had. It was pure natural ability what he did there.

“He jumped well, a bit green looking at the Irish hurdles even though he’s schooled over them before. Mark thought he was in control at all stages and I’m very happy with the performance.”