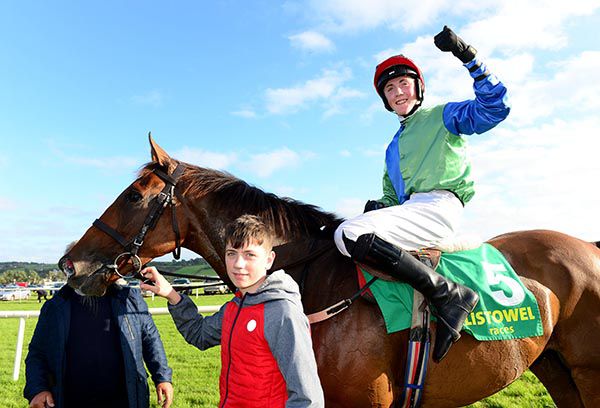 Shanwalla credited the Gilligan family with a notable success at Listowel today as the well backed winner of the concluding Listowel Vintners Association Bumper provided jockey Jack Gilligan with his first career winner.

The son of Dubai Destination, backed from 11/2 to 4/1 on track, had filled the runner-up spot on each of his two previous efforts and today went one placing better when beating the Willie Mullins trained newcomer Eurotiep by two and three parts of a length.

Shanwalla is trained by Cheltenham festival winner Paul Gilligan, father of the winning jockey and husband to winning owner Natalie Gilligan and later said “the form has stood up and he’s never run a bad race. This horse thrives on racing.

“Jack has never ridden a bad race, and he did exactly what he was told there.

“It’s Jack’s first winner, and he hasn’t ridden in ten races yet. He might change to conditional sometime during the winter because he can do very light weights.

“He’s 16 and has just done his junior cert. When he was younger he wasn’t interested in racing at all, and next thing he took off and is flying now. It’s his day.”