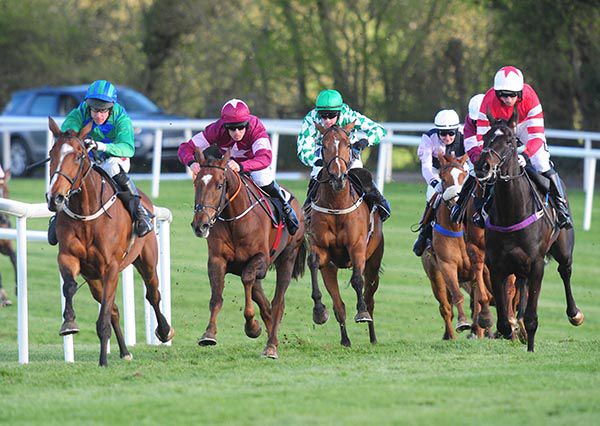 Willie Mullins took Punchestown by storm on day two of the Festival and he completed a Grade 1 treble with Tornado Flyer leading home a 1-2-3 for the all-conquering Closutton yard in the Racing Post Champion Bumper.

It was run the first time this year for the historic Conyngham Cup, previously a handicap chase for amateur riders, and Mullins held a very strong hand with four of the first five home in the Cheltenham bumper reappearing here.

Carefully Selected took over from the front-running Felix Desjy approaching the straight but was strongly pressed inside the final quarter mile by Blackbow with Tornado Flyer challenging late between the pair.

Richie Deegan timed his run to perfection on the easy-to-back 12/1 chance, who was third at Cheltenham, and kept on really well in the closing stages to score by a length and a quarter.

The 9/4 favourite Blackbow took second with Carefully Selected another length and three quarters away in third, while the trio went 13 lengths clear of the remainder.

Tornado Flyer is the one in the Champion I.N.H Flat Race at @punchestownrace. 1-2-3 for Willie Mullins! pic.twitter.com/oGujW73G9e

Mullins said, “At different times up the straight you could have made any of the three of them the winner. I thought Carefully Selected had nabbed it turning for home and when Patrick came through I thought he was going to win.

“All the time I could see Richie just keeping his horse covered and I said if he gets a bit of daylight, minds the little bit he has in the tank and plays his card at the right time... It was a real good ride. Richie claims 5lb and it was a tremendous ride for a 5lb claimer (not able to claim in this race).

“He rode a winner for me in Listowel two years ago and he's a guy that impresses me, he impressed me that day. It's very seldom we need an amateur rider, with Patrick and Katie, but I've always tried to use him if I could.”

“It's great for Graham Wylie after having such a bad year. John Turner has a few nice horses with me and it's good for him to win here as well. Those bumper horses look nice novices for next season."