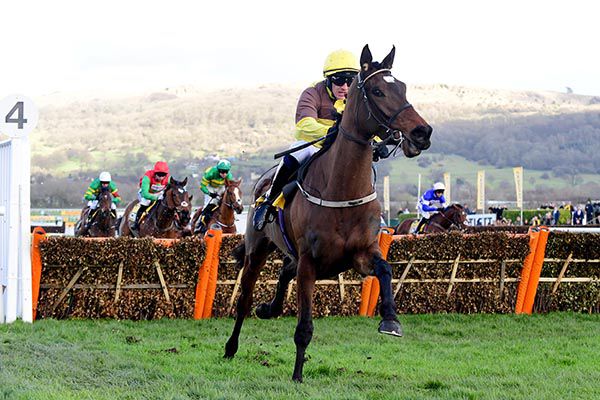 A dramatic renewal of the JCB Triumph Hurdle saw Goshen crash out at the final flight with the race at his mercy — leaving Burning Victory to record an unlikely success at Cheltenham.

Ridden by Jamie Moore for his father, Gary, Goshen looked set to run out a brilliant winner when he approached the last well clear of the opposition, after surging ahead from two out.

But there was a miscommunication and he appeared to just clip the top of the last, causing him to jink one way and giving Moore no chance of staying on board.

Allmankind, who had given the strong-travelling Goshen a lead and had most of the field under pressure, tried to rally, but Burning Victory, who had been ridden patiently, emerged to have her say.

With Goshen gone in dramatic fashion, Paul Townend took his opportunity and the Willie Mullins-trained Burning Victory (12-1) stormed up the hill to score by two and three-quarter lengths.

Aspire Tower was second, with Allmankind three-quarters of a length away in third place.

Mullins said: “I just feel very sorry for Gary and Jamie. Jamie did everything right and rode the perfect race. He had the race in the bag and asked the horse all the right questions at the last, but the horse didn’t answer and he just got unbalanced.

“I’m delighted we’ve won for our owner, but I feel hugely for Gary and Jamie — a father and son team. I know them fairly well, this was their one shot at a winner at the Festival and the work was done.

“I was just thinking of myself and Patrick and we’ve been there with Ruby (Walsh) as well. I know what it feels like.

“It’s not a victory I’m going to celebrate hugely — we got the rub of the green.”

Of Burning Victory, he added: “She’s not the best jumper in the world. She jumped the first two great, but missed the two down the back and Paul knew the race was over. He was riding to maybe get into the money if he could.

“She has a huge engine and hopefully she can brush her jumping. She’ll probably go back to Fairyhouse now.”