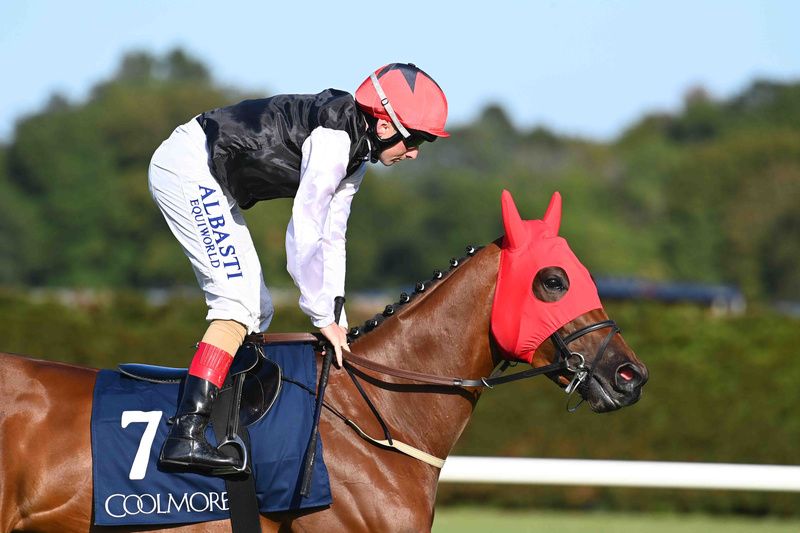 The Dermot Weld-trained Homeless Songs was a brilliant winner of the fillies’ Classic at the Curragh in May, but prevailing fast ground meant she missed much of the summer.

She was a hot favourite to make a successful return in the Matron Stakes at Leopardstown three weeks ago — and while she was ultimately well beaten in fourth place, connections are expecting an improved performance in a race Weld and owner-breeders Moyglare Stud Farm won 20 years ago with Dress To Thrill.

Fiona Craig, advisor to Moyglare, said: “I think she’s in great order, it’s probably the right race and we’ll give it a crack.

“She was a bit short (of fitness) going to Leopardstown — the ground was so firm we couldn’t work on the grass. Since then we’ve had a bit of rain, she’s been able to do a fair bit out and about now.

“We could have gone to Paris for the Prix de la Foret on Sunday, but I think the concern with that was the ground could be very cut up by then, particularly after a 20-runner Arc.

“We know she can go in a straight line over a mile and I think the surface at Newmarket will be absolutely fine.”

While hopeful Homeless Songs will give a good account, Craig is respectful of the opposition.

She added: “Saffron Beach is an outstanding filly and there are couple of other useful ones in there as well, so Homeless Songs is going to have to put her best foot forward.

“We think she got out of the race at Leopardstown what she needed to get out of it and we hope she’ll have improved suitably, so on we go.”

Saffron Beach broke her Group One duck in this Qipco British Champions Series contest 12 months ago and is even better this season judged on wins in the Duke of Cambridge Stakes at Royal Ascot and the Prix Rothschild at Deauville.

She filled the runner-up spot behind Pearls Galore in the Matron — finishing two and a half lengths in front of Homeless Songs — and Jane Chapple-Hyam is confident of another bold showing.

“She enjoys going two miles down the road, rather than getting a train or a ferry, and I think she’s improved again going into the Sun Chariot,” said the trainer.

“The scales don’t lie and she has put on another four kilos since she went to Leopardstown. She’s more powerful to look at now, and the feedback from her riders has been very positive too.

“There’s some rain forecast for Friday, but the ground won’t be like Leopardstown, where she couldn’t extend and stretch like she normally does but still ran a good race to be second in another Group One.”

Prosperous Voyage inflicted a shock defeat on the brilliant Inspiral in Newmarket’s Falmouth Stakes during the summer, but was no match for the same rival in the Prix Jacques le Marois next time.

Jockey Rob Hornby said: “It was a real career highlight for me when I won the Falmouth Stakes on Prosperous Voyage, especially as she had been the bridesmaid to Inspiral twice and then again to Cachet in the 1000 Guineas.

“It was a combination of things when she was below par at Deauville last time. The ground was a factor, but it can be difficult taking fillies abroad anyway. She’s had a bit of a break since then to freshen up, and when I rode her last week, she seemed in really good form.

“On official ratings I think we are only 2lb behind Saffron Beach, who is a very talented filly and has done Jane and her team proud, so on our best form we ought to have a good chance.”

Laurel is a fascinating contender for John and Thady Gosden — turning out just 10 days after supplementing her Newmarket debut win in a minor novice event at Kempton, with owners Juddmonte stumping up the required £20,000 supplementary fee to add her to the field on Monday.

Juddmonte’s racing manager, Barry Mahon, said: “It is throwing her in at the deep end, but she’s a nice filly, she’s had two starts and won them both well and I think she’s a filly that the Gosdens like.

“We probably are being a little bit unfair to her, but we’re at the start of October and opportunities are few and far between.

“We just felt we’d have a little bite at a big one and if she can finish in the first five, it will tee her up nicely for her four-year-old campaign.”