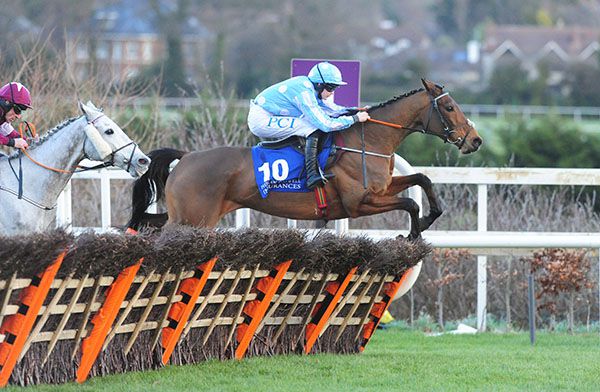 The Henry de Bromhead-trained Honeysuckle confirmed her star status when running out a game winner of the PCI Irish Champion Hurdle at Leopardstown this afternoon.

Punters latched on to the unbeaten mare in the two-mile feature on day one of the Dublin Racing Festival as she was backed into 8/11 favourite having been a 13/8 shot in the morning.

Rachael Blackmore, recording a Grade 1 double on the day following the earlier win of Notebook tracked front-running stable-mate Petit Mouchoir for much of the race.

She let the daughter of Sulamani move up to tackle the grey going to the second last but was slightly untidy at that flight.

It didn't halt her momentum however as she kicked for home turning into the straight. The six-year-old gained a couple of lengths advantage going to the last but jumped left there letting Petit Mouchoir back in with a chance.

Honeysuckle showed guts to match her talent as she knuckled down to edge ahead again on the run-in. Darver Star flew home in the closing stages to grab the runner-up spot, getting within half a length of the winner at the line with the same margin back to the gallant Petit Mouchoir.

“She just looked like she got a bit lonely going to the last. She's so tough and the lady on top of her is so tough. She really battled it out,” said de Bromhead.

“All credit to Petit Mouchoir and Davy Russell, he ran a brilliant race again and Gavin's horse looked very good.

“I had my heart in my mouth coming to the line. She probably needed it and our two went at it fairly early.

“Talk about adapting to two miles, she seemed brilliant. I thought she jumped well to be fair, maybe at the second Patrick jumped past her.

“At the second last I'm not sure if Rachael sat on her and Davy go a good jump or if she make a mistake. I think she was just lonely in front at the last.”

“Rachael is brilliant and I always say that we are very lucky to have her. She's just riding out of her skin and the mare is deadly.”

When asked where she would go from here he added:- “We'll enjoy today. We've won PCI Irish Champion Hurdle and we can discuss all that in time. I'm delighted to get today behind us.”

“We're very lucky to have these horses and get supported by great clients and we have a great team around us.”

Blackmore added:- “She’s got a massive heart and a massive will to do it. Petit Mouchoir ran a cracker and always does over two miles.

“She’s always done everything I’ve asked her to do and I wasn’t too worried about coming back in trip.

“She needed to stay well to win after the last and that’s what she did.

“Mark Phelan (Chief Executive of PCI Insurance) is my sponsor and has been such a great supporter of mine. It’s great to win his race, the PCI Irish Champion Hurdle.”

Willie Mullins didn't feel that Sharjah ran his race after he finished a well beaten sixth:-

“At the first hurdle down the back he stood way back at it and then he missed the next and did the same thing at the one after that.

“I thought those two jumps took just took whatever chance he had. He put too much effort into jumping those hurdle, normally he doesn't do that and it's out of character.

“It wouldn't look like his run on the form of the race. We'll go home and see, it's back to the drawing board with him.

“I'd imagine we'll probably prepare him now for the Champion Hurdle and take our chance.”

Betfair clipped the winner into 5/1 from 6/1 for the Champion Hurdle while Boylesports are 4/1 (non-runner no bet).