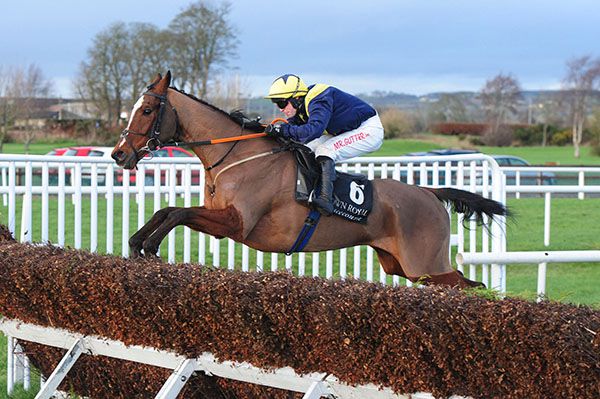 Saol Iontach (joint market-leader, reported clinically abnormal post race) didn’t come up to expectations for him earlier on but Gavin Cromwell struck in the penultimate event at Down Royal courtesy of the Johnny Moore-ridden Jurby.

This Molson Coors Handicap Chase over three miles was a real test for its ten participants, and seven of them managed to complete.

Jurby (12/1) was settled behind the leaders, and he was fifth at the halfway stage.

He improved into second before four out, soon pressing the leader.

The Cromwell runner led before two out, and soon ridden the successful ten-year-old asserted before the last, keeping on well to account for the rallying Aherlow by three and a half lengths.

"Slow, jumps and stays! He loves it when he gets to the front, he enjoys himself and jumps great," said Cromwell.

When asked if he could be a horse for the Ulster National at Downpatrick, he replied: "I haven't really thought any further than this. He needs a trip and is a staying chaser. That's an idea in my head now."

Owing to the low lying sun, the Stewards granted permission for fence #3 to be omitted from this race

The Irish Horseracing Regulatory Board Veterinary Officer examined Rooster Byron, trained by Paul Nolan, at the request of the Stewards and reported the animal to be post race normal.

The Irish Horseracing Regulatory Board Veterinary Officer examined Final List, trained by Gordon Elliott, at the request of the Stewards and reported the animal to be lame post race.

The Stewards interviewed Rachael Blackmore, rider of Aherlow, concerning her use of the whip in the latter stages of this race. Evidence was heard from the rider concerned.

Having viewed a recording of the race and considered the evidence the Stewards were of the opinion that Rachael Blackmore was in breach of R10(3)(g) by using her whip with excessive frequency.

Having taken her previous record into consideration, the Stewards cautioned Rachael Blackmore on this occasion.