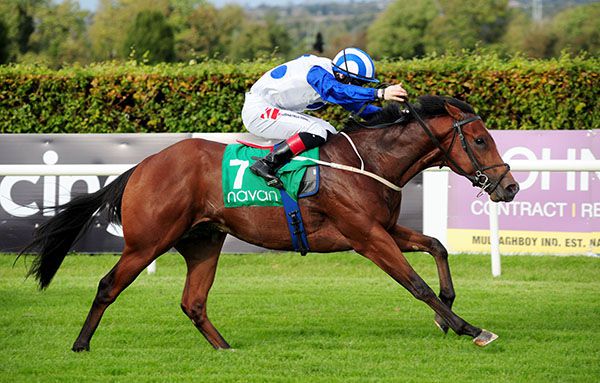 Colin Keane moved on to 100 winners for the season when Nullifier ran out a convincing winner of the opening Irish Stallion Farms EBF Maiden at Navan.

The well-backed 2/1 favourite (9/2 this morning) raced prominently on the outer in the five-furlong contest before being asked to hit the front over a furlong from home.

Ger Lyons' charge kept on strongly inside the final furlong to post a two length success over Xian Express.

The winner was turning out quickly having been third over six furlongs at Naas on Sunday.

Ger Lyons said:- “Credit to Shane (brother and assistant trainer) he called me about five minutes after the run on Sunday and said it had taken nothing out of him.

“He was right, and Colin also jumped off him on Sunday and said you can drop him back to five if you want.

“He’s a typical No Nay Never, handles the ground and is a good strong colt.

“He’s done his job and got us a winner when we needed it. He’s given Colin his 100th winner and keeps him somewhat in the fight.

“We’ll put him away until next year and hope he grows into a horse. It looks like five or six will be his trip at the minute and he looks like a sprinter as well.

“Colin said he idled and didn’t know what to do when he got to the front. There should be plenty of improvement over the winter in him.”

Keane added:- "That's great. I'm thrilled to have got to 100. Win, lose or draw it has been a great season for me.

“The target I set myself at the start of every season is to beat the previous year's tally so last year I had 84 and I have beaten that.

"I reached 100 on the final day two years ago so to have reached it again with a few days to spare is great. We had a Group 1 along the way too, so all in all, it has been a great year."

When asked if he can win the title he responded:-

Keane now sits four behind Donnacha O'Brien in the race for the jockey's title.