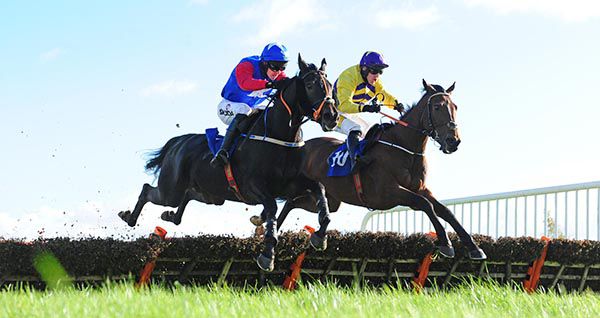 It was Ellaat who was slicker at the last and he ran on well to account for the market leader by three quarters of a length with the front two well clear of the rest who were headed by Mist On The Bog (18/1).

It was a first success over hurdles for the 5-year-old to go with two wins on the Flat.

County Derry-based winning trainer Noel Kelly had plenty to say afterwards about the lack of opportunities for his horses across the water.

“He's a game wee buck, I thought the ground was maybe going to be a bit too soft for him but he got away with it alright.

“He ran very well the last day in Gowran and probably improved a bit from that.

“There wasn't much depth in the race today, bar the favourite. He deserved to be thereabouts and was a good each-way bet.

“I don't think he's really a horse for Dundalk and we might try and get another run into him over hurdles and then come back again next summer.

“He could have gone across water but they can't run in the class 5s over there, it's absolutely disgraceful.

“I had one horse at Hexham the last day and they wouldn't let me run anything else at it, I could have run six at the meeting.

“I'd be over in Hexham quicker than I get here and he'd get into a class 5 over there no problem. They hate to see us going over there to get the prize-money.

“The authorities here should be under more pressure to get us across. I'd be in Ayr in two hours from my house.

“Covid is only an excuse to keep us away from the prize-money and I've been told that by people over there.

"Sure we've gone over there plenty of days and been beat, that's racing and that's the name of the game.

“It's disgraceful, why are they letting the bigger yards go over and not the small boys.

“We have to look after our owners as well and it's not easy to get a run here in Ireland whereas at least you can plan out something for a horse in Britain as you are sure to get in.

“You can take owners over for a weekend and at least they are going to stay in racing but the way I'm fixed half of them are going to be sick of it.

“My owners only have cheap five or ten grand horses.”