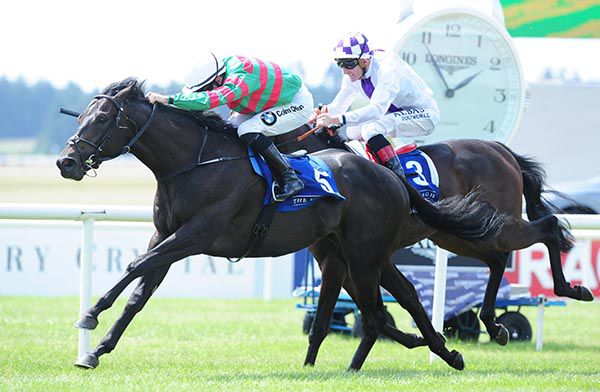 20/1 shot Klute proved too hot to handle for his rivals in the opener at the Curragh when bouncing out and making all for a successful debut.

The son of Kodiac was asked for an effort passing the two pole and responded well for Colm O'Donoghue.

Jessica Harrington's charge stuck on well in the closing stages as Guaranteed stayed on to get within half a length at the line.

The winner cost €120,000 as a yearling. His dam is a half-sister to dual Group 3 winner Layman and they are from the family of Alydaress, Park Appeal and Cape Cross.

“I'm delighted with him. We've always liked him but it was a very very smart maiden,” said Harrington.

“He's a smashing horse and Colm just said he was galloping along there in front, stayed on and did everything easily. It was very straight-forward.

“He stayed the seven well. Being by Kodiac I thought he mightn't stay but he's fairly stoutly bred on the dam's side. He probably could drop back to six.

“He's in the National Stakes. Other than that we'll just take it step by step. We'll see what happens.”

Colm O’Donoghue added:- “He was only a shell of horse when he came to us in the spring. We just left him alone and let him enjoy his work.

“He’s only been away twice, so you would like to think there is plenty of improvement.

“It has turned out to be a good maiden over the years, so hopefully he can go on and do something.”