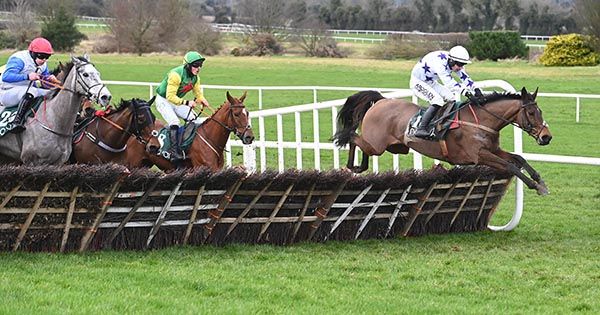 Macs Charm was off the mark on his first venture outside of maiden company in the Ardmulchan Handicap Hurdle at Navan for Colm Murphy and Brian Hayes today.

There were Hachibald shades about Jack Kennedy’s effort on runner-up Banks Boy, and though Paul Carberry’s mount famously lost out by a neck to Hardy Eustace in the 2005 Champion Hurdle, the much lower profile individual this afternoon flattened out close home to be beaten half a length.

Determined prominent racer Macs Charm wasn’t to be denied, and himself and Banks Boy drew eleven lengths clear of Endlessly in third.

“I'm delighted with that, he stays at it really well,” said Murphy.

“He's been hard on himself over further hence why we dropped him back to two-and-a-half. He's a three-mile horse in time and I suppose he proved that today.

“He's in again on Thursday but I'm not sure whether we'll go to war with him again so quick but it's an option. We'll look for something similar otherwise.”

D.N. Russell, rider of Lugg River (GB) trained by Gordon Elliott, reported to the Clerk of the Scales that his mount was lame on pulling up.

The Irish Horseracing Regulatory Board Veterinary Officer examined Lugg River (GB), trained by Gordon Elliott, at the request of the Stewards and reported the animal to be lame on his right fore post race.

R.A. Doyle, rider of Machine Learner (GB) trained by J.F. Levins, reported to the Clerk of the Scales that his mount took no part in this race after a fair start had been affected.

At the request of the Stewards, J.W. Kennedy, rider of Banks Boy, trained by Gordon Elliott, reported to the Stewards' Secretaries that he did not want his mount to get there too soon as he can be lairy, so he produced him late and his mount just stayed on one paced when he came off the bridle.

P.J. O'Hanlon, rider of Thegoaheadman trained by Martin Gerard McGuane, reported to the Clerk of the Scales that his mount never picked up when asked to do so.