Maiden to Listed winner in 4 days for O'Brien's Baby 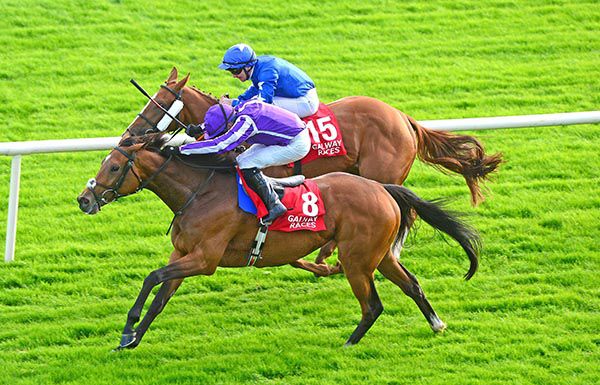 Progressive three-year-old Baby Pink (10/1) shed her maiden tag at Listowel last week and she took it to another level when following up today in the Listed Ardilaun Hotel Oyster Stakes at Galway.

She obviously copes very well with testing conditions and under Niall McCullagh that helped in her getting the better of favourite Princess Yaiza, by half a length, after a tremendous scrap up the straight.

Baby Pink was one of no less than four runners in here for Joseph O'Brien. His father Aidan had three in the mix, whilst the Coolmore partners own Alwaysandforever, brought across by Luca Cumani.

However the best any of these could manage was fifth (High Language took that spot for Joseph) as Morga ran on well for third, a length and a half off the principals.

Said McCullagh, after riding his first winner for Joseph O'Brien: "I've ridden a couple of times in those colours for Joe's (O'Brien, winning trainer) dad Aidan so it was great when Ciaran (O'Toole, agent) said he had a spare in the Listed race and I saw it had won on heavy ground at Listowel. When you go on the ground you always have a chance.

"Joseph said to jump out and try to get her away - sometimes she can be sluggish, but if you're in the first three or four ride her handy and ride a normal race.

"In fairness she ground it out very well and got to the line good. It's great to get black-type for her and to win is absolutely fantastic."