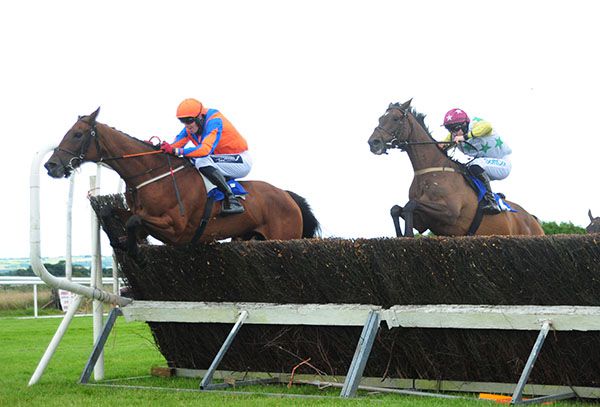 Make My Heart Fly, far side, leads over the last
© Photo Healy Racing

Make My Heart Fly grabbed the honours in the Oran Chase at Roscommon, a race in which the first five home were separated by less than three lengths.

The eight-year-old mare worked her way into the lead between the last two fences, but was there to shot at by her rivals.

Make My Heart Fly's stablemate, the 5/4 favourite I'm A Game Changer, finished out of the places in third, beaten two lengths.

This gave Elliott a double on the card as he also won the second race with The Very Man.

“She always picks up a bit of prize-money and was a good second last week in Killarney.

“She did that well there. I jumped the second last very well and probably got there a little bit soon but she kept going well. She battled well and she's tough.

“I'm sure Gordon will find plenty of options for her.”

This was Make My Heart Fly's sixth victory under rules.

The Stewards received a report from the Clerk of the Scales, Ms. Colleen Murphy, that K.M. Donoghue, rider of Make My Heart Fly, presented himself at scales and attempted to weigh out wearing a body protector with the harness removed. Evidence was heard from Ms. Murphy who stated that K.M. Donoghue had assured her that he had a harness attached to his body protector, however when asked to verify this it transpired that piece of equipment was missing. K.M. Donoghue confirmed the report of the Clerk of the Scales and added that his intention was to change his normal harness for a lighter one and forgot to attach same before weighing out. Ms. Teresa Behan, Irish Horseracing Regulatory Board Security Official in the weigh room area confirmed the report of the Clerk of the Scales. Having considered the evidence, the Stewards were satisfied that K.M. Donoghue was in breach of Rule 198 (v) and suspended him for seven race days.