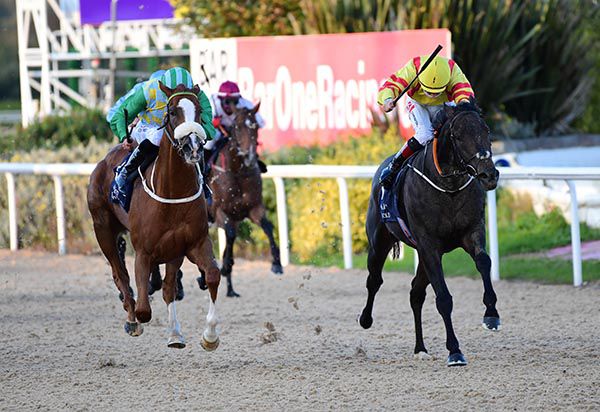 The 10/1 shot brought up a double for Colin Keane who won the opener on the card on Ahyoka. Bowerman is now three from three at Dundalk.

The pair were fully 10th of the 14 runners with three furlongs to travel but made good headway a furlong and a half down.

They worked their way to the front inside the final furlong and fended off 40/1 outsider Sky Seven by half a length.

Gold Maze (17/2) passed the post in third place another two and a quarter lengths away.

“We worked him up here during the week and he was very good. He's a dream horse to have and I'm delighted for the lads, the Total Recall Racing Club. They're very loyal owners and have been very very lucky.

“That's the first group race I've ever won, so I'll remember it.

“He's probably going to be finished for a while but if some of the middle east races open up later on the year he'll head out to one of those places - Dubai or he could go to Bahrain or Doha if we can get an invitation.

“I'm thrilled to bits. I'm lucky to have two or three very nice horses and that's what it's all about. When you get those type of horses you can go an awful lot more places.

“I owe a lot to the late Bart O'Sullivan, who passed away last year, as he introduced me to a lot of new owners from England and we've really prospered.

“The Total Recall lads have been with me since I started and we've had 36 or 37 winners.

“We had Beau Michael, Beau Warrior, Beau Satchel, winners at Galway, and I'm blessed to have them.”

Bowerman's overall record is now an impressive eight winners from 18 runners. His last success was in the Irish Lincoln at the Curragh in June.

Malayan (15/2) won the Lord Hemphill Memorial Irish EBF Median Auction Maiden to give Colin Keane his third winner of the week at Galway.

Exciting Real World held in high regard by bin Suroor

Saeed bin Suroor will continue to take small steps up the ladder with Real World — but he believes the potential is there for the son of Dark Angel to reach the top.

Church Mountain off the mark for Hogan & Sheridan

Church Mountain (12/1) made most to win the opening Kenny Galway Volvo 3-y-o Handicap in the hands of 5lb claimer Joey Sheridan.

Bumper and maiden winner Monas Melody faces a couple of highly-rated rivals in the 1m6f conditions race at 4.20, but nonetheless Sam Curling's mare has been backed from 10/1 into 4/1 with Seamie Heffernan taking the mount.