Meade and Flanagan double up with The Red Menace 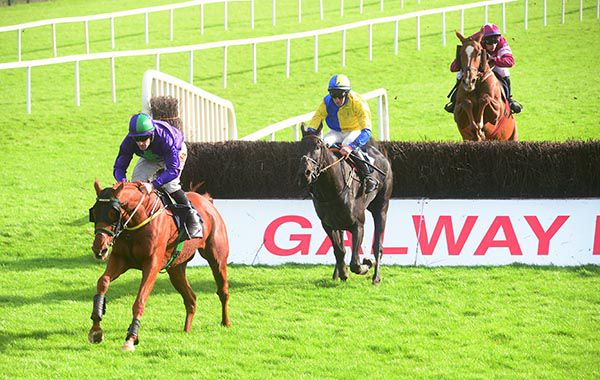 The Red Menace galloped his rivals into the rain-soaked turf in the Ryans Cleaning Steeplechase at Galway.

The 7/2 shot was another horse to dominate from the front and poured it on the opposition coming into the straight.

He powered home under Sean Flanagan to win by a comprehensive 21 lengths from Charlie Stout (5/2).

Noel Meade said: "I was worried would he go on the ground as he had never ran on it before.

"Previously he dropped out when he got passed, but he jumped brilliantly today and it now looks like that ground is what he wants.

"We were talking about giving him a break but we'll keep going now and three miles is what he wants."

The Red Menace gave Meade and Flanagan doubles on the card as they also landed the opener with Battle Of Midway.

Dream Tale (4/1) showed a really good attitude when taking the one mile handicap at 5.15 for owner /trainer Andy Oliver.

Paris Texas served up a 25/1 surprise in the Laffy handicap Steeplechase over an extended two miles seven at Downpatrick.

Tom Gibney’s horses continue to perform with great consistency and 3/1 favourite Robin De Roost was another winner for the Kells handler in the Virtual Live Racing Handicap Steeplechase (0-102).