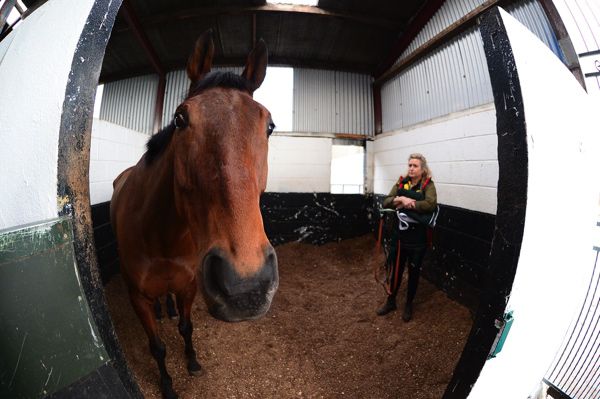 Already a dual Festival winner, the Pat Kelly-trained eight-year-old has been towards the head of the market for the blue riband ever since sealing his second victory in the Cotswolds with a scintillating display in the RSA Chase last March.

His preparation for the most prestigious race in National Hunt racing has been far from conventional, however — with his successful defence of the Galmoy Hurdle at Gowran Park in January his only competitive start since last year’s Festival.

Presenting Percy nonetheless carries the hopes of a nation on Friday afternoon — something that is not lost on his owner.

Reynolds said: “I don’t understand the whole ‘people’s horse’ thing, but he’s a horse that goes out and gives you everything he’s got. He puts it on the line every day he goes out, and I think people admire that.

“Pat is pleased with him, and it would of course be very special to win a Gold Cup on a number of levels.

“He’s been favourite for the Gold Cup since he won the RSA last year, and it’s very hard to put it out of your mind — particularly when you’re on the run-up to a race as well.

“It’s easier when he’s in Pat’s and I know he’s being looked after and couldn’t be in better hands. But when we’re in the parade ring before a race, it’s terrifying, to be honest.

“I expect it will be much the same.”

With conditions having turned in his favour, hopes are high that Native River can become the first horse to win back-to-back renewals of the Gold Cup since three-time winner Best Mate (2002-2004).

Since his epic victory over Might Bite 12 months ago, Colin Tizzard’s bold-jumping chestnut has finished second in the Betfair Chase at Haydock and third in the King George VI Chase at Kempton.

Joe Tizzard, assistant to his father, said: “This race has been the plan all season — it is the first time he is going to get his perfect conditions, and he comes here in great nick.

“People keep telling me it is difficult for horses to win back-to-back Gold Cups, but there is nothing showing us at home to suggest this horse is any worse than last year — and he is going to get his conditions.

“Every Gold Cup is competitive, and Might Bite was certainly no pushover last year. I think this race is wide open, as far as Gold Cups go.”

Tizzard added: “I know Thistlecrack is 11, and he is not getting any younger, but he has not got loads of miles on the clock and on his day he is a fair horse.

“It is great to get him there after missing the race the last two seasons. He deserves to run in the Gold Cup.

“Elegant Escape is improving and is a young horse going in the right direction. He is entitled to run as well.

“If he can hold his position at the top of the hill then we know he won’t stop, because he will keep galloping all the way to the line.”

It is 10 years since the Ditcheat maestro last claimed the most prestigious prize in National Hunt racing with Kauto Star, but he has strong claims of adding to his tally with this season’s King George and Ascot Chase hero.

Nicholls said: “He is one of the favourites for the Gold Cup and he has had a great season this year. He ran very well in the Betfair Chase, and we knew he would improve enormously that day to Kempton.

“He won the King George very well and then he won well at Ascot well in the Denman Chase. Touch wood, everything has gone to plan since.

“From the day he won his first three-year-old hurdle, we knew he was going to be a proper chaser. Last year we couldn’t train him the way we wanted him because he had babyish issues, which held us up all the time.

“Now we are where we want to be — and of all the horses in the Gold Cup, he is probably the improving youngster.

“Is he good enough to win a Gold Cup? Who knows. He is probably the best I’ve ever had him, but he will need to be.”

Having saddled the runner-up on six occasions, Willie Mullins has a strong hand of four runners as he bids to finally break his Gold Cup hoodoo.

Mullins said: “We have four runners — and depending on what happens on the day, any one could win.

“Bellshill put in a huge performance, I thought, the last day — and he’s improving. Cheltenham hasn’t been his luckiest place. Maybe this is the year that he’s going to change that.

“Kemboy is improving too. We didn’t run him in the Irish Gold Cup. Maybe we should have done, but I felt he’d done enough at Christmas and we’d just get him ready for this race.

“It’s a funny year. Lots of form has been turned upside down — and it’s quite an open Gold Cup, I think. He goes there with a good chance.”

That pair are joined by stablemates Al Boum Photo (Paul Townend) and Invitation Only (Patrick Mullins).

Mullins junior said: “I don’t think the ground will inconvenience any of ours. I suppose Kemboy might prefer better ground, but it will be fresh ground in the Gold Cup.

“I don’t think there’s a lot between our top three. Bellshill hasn’t shown his best form at Cheltenham, but might be better running on the New Course for the first time.

“Kemboy and Al Boum Photo are two improving, young horses and have travelled over well.

“Hopefully one of them can finally deliver the Gold Cup for Closutton.”

Last year’s runner-up Might Bite has looked a shadow of his former self so far this season, but trainer Nicky Henderson is optimistic he can bounce back following a wind operation.

He said: “We are happy, and the last bit has been great. We’ve done a few things with him.

“The King George was a disaster, as was the Betfair Chase, but to me that bears little relation to the Gold Cup.

“We think we are in better shape than we were- he is as good as we can get him we think. Soft ground is an issue.”