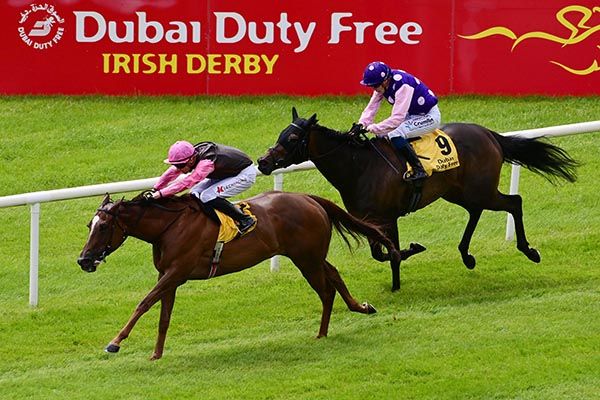 The Dubai Duty Free Summer Fillies Handicap boiled down to two horses and it was Night Of Romance who delivered at 5/1 under Dylan Browne McMonagle. Needle Lace (9/4f) was backed to give Ken Condon and Billy Lee a quick-fire double on the card and she set out to make all over seven furlongs.

Night Of Romance didn't give her a free pass, though, and the pair moved on with a quarter of a mile to travel.

Needle Lace came under the whip a furlong and a half down with Night Of Romance seemingly travelling much the better upsides.

Browne McMonagle pushed his filly into the lead approaching the final furlong and she kept on well to beat the runner-up by a length and a half. Marbling came in third, a further two and a half lengths away.

Browne McMonagle said: "From the gates I got across into a lovely position and I just followed Billy (Lee on Needle Lace) the whole way. I knew I had him covered a long way out.

"It was like a bit of work really, I was able to keep filling her up all the way to the two (pole). I was very confident after halfway as I got into a nice rhythm and I was full of running everywhere.

"Once I popped the question, she picked up really good and hit the line well. The step up in trip definitely paid off - she was good over seven in Gowran the last day.

"She is a filly going the right direction now, it was a good performance. In fairness to her, she's a really hardy filly, she tries hard and she hit the line well.

"She won at the Racing League in England (Doncaster) and she just never fired after that. A break during the winter did her no harm. She has come back in great order.

"She is one that will definitely be getting black-type hopefully soon."

Joseph O’Brien added: “She’s improving and the step up to seven furlongs has probably been the key to her. She has taken her form to a new level and she hit the line well.

“Dylan gave her a good ride and had her in a great position from a wide draw.

“We’ll see what the handicapper does and we will probably be forced into black type now but I’m very happy with her.

“Johne Murphy runs the Thoroughbred Racing Syndicate and there is a good few lads involved in it.

“We bought this filly last year and she won in the Racing League in the UK.”