No worries this time as Kokura passes the post in front 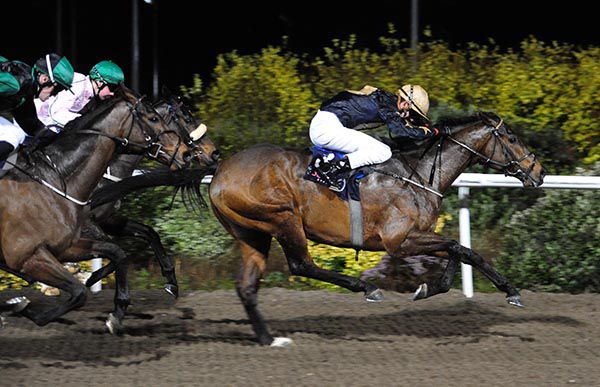 Back a furlong in trip proved no hindrance to the Johnny Murtagh-trained and Ben Coen-ridden British-bred son of Fountain Of Youth.

Newcomer Rio Ocho ran well to finish half a length second, whilst Algeria (4/1 — 9/2 — 3/1, not clear run) was also doing decent late work to be a length and a quarter back in third.

Kokura hung slightly left after taking over a furlong out. That didn’t stop him though.

“He was always going to do that after the last day,” said Murtagh.

“He's still learning and Ben said when he went to the front he pricked his ears, he's not quite sure what to do, but he has a bit of an engine I'd say.

“He's coming along, it took him a while for the penny to drop but he's starting to kick into gear now.

“We'll see what happens over the next couple of weeks. I don't know whether we'll come back here or wait for the grass. He'd be fit if we go back on the grass.

“He thought he was going to win well but when he let him go he said he pricked his ears again and maybe after the last day he's remembering it.

“He's a slow learner but he's coming along all the time and hopefully he can improve on that.”