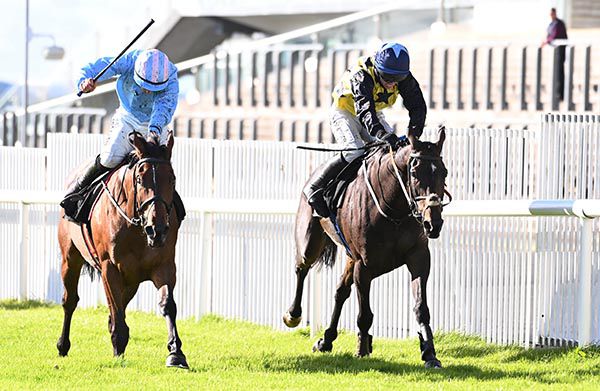 Noble Yeats and Gabynako battled out the finish to the BetVictor Beginners Chase, with the Emmet Mullins trained former just prevailing under Brian Hayes.

Second in a point-to-point for Donie Hassett in December of 2019, the bay six-year-old was then bought by current connections for 75,000 pounds.

A winner of a bumper at Thurles in January and successful over flights at Navan in March, the Paul Byrne owned victor was sent off at 11/2 this afternoon, on what was his racecourse debut over fences.

Settled behind the leaders and third from halfway, he made a mistake at the seventh and dropped to fourth.

Pushed along from three out, he responded well when ridden from the last, getting to the front inside the final 50 yards, going on to prevail by a head.

Gabynako (9/4), who made a mistake four out, hit the front at the last but couldn't repel the winner and had to settle for second under Darragh O'Keeffe.

The front-pair were eight lengths clear of Magic Daze in third, with this one returned the 6/4 favourite under Robbie Power for Henry de Bromhead.

"He was a bit novicey at a few and made little mistakes, but nothing major," Hayes said.

"It was his first run back and he seemed to handle that ground. He'll be a nice horse going forward in those novice races for the rest of the season."