Notebook digs deep to fend off Cash in Arkle 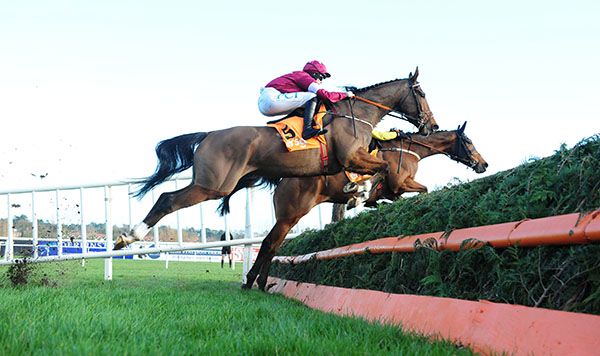 Notebook dug deep to emerge on top after a protracted duel with Cash Back in the ERSG Arkle Chase at Leopardstown this afternoon.

The two-mile-one contest developed into a match from the second last as Notebook jumped up to just about head the front-running Cash Back.

The later was soon back on terms and the pair settled down to fight it out going to the final fence.

Notebook had a marginal advantage jumping the last and found plenty on the run to the line, for Rachael Blackmore, to hold his rival at bay by three-parts-of-a-length.

The 5/4 favourite was recording a Grade 1 double at the track having also taking the Racing Post Novice Chase at Christmas.

“He had to tough it out and he jumped brilliant. Cash Back gave us some race there,” said de Bromhead.

“I didn't think he jumped to his right as much as at Christmas, he was very good today.

“A few of ours have improved a lot over fences through the years. Special Tiara was a 116 hurdler and Ordinary was 118.

“Some of them need a fence and you saw his jumping out there, he's a dream and he just seems to love it. Also I was running him over the wrong trip for most of last year!

“He'll go straight to the Arkle and fingers crossed we get a clear run.

“He seems to have won on everything but he's probably marginally better on better ground.

“It was a super ride from Rachael and some race, lucky we came out on top.

“We've five weeks now so we'll freshen him up and try and have him as right as we can.”

Blackmore added:- “He’s such a pleasure to ride. He attacks his fences but he’s well able to shorten as well. He’s class.

“It felt like I was in front too soon but he was ahead at the right place anyway.”

Willie Mullins was delighted with the performance of runner-up Cash Back:-

“That was a huge step up in class for Cash Back and I was very pleased with him.

“I'd imagine he'll for the the Arkle at Cheltenham. The winner was very good, did it very well, and he's going to be hard to beat.

“That was our fella's third run and there is the chance that we can improve more.”

Boylesports shortened the winner into 5/2 from 7/2 for the Arkle at Cheltenham while Betfair are 10/3 from 4/1.