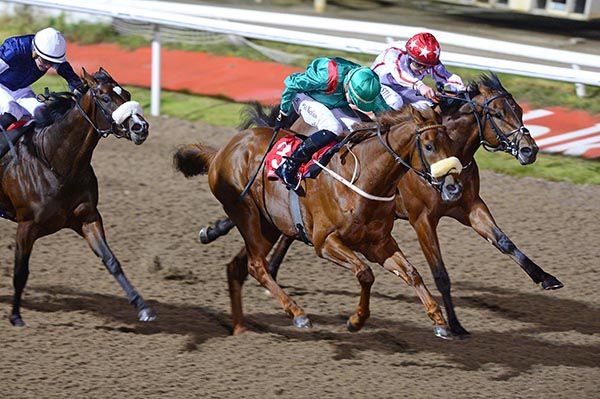 A great finish to the Irish Stallion Farms EBF (C & G) Maiden saw Ocean Monarch, Numberoneson and Balmari separated by a head and the same in Dundalk’s fifth event.

‘The finishers’ were Ocean Monarch and Numberoneson, as Balmari got run out of it close home.

Well-backed favourite Ocean Monarch (2/1 from 5/2 on track, bigger earlier) was building on a debut fifth placing over a furlong shorter at this venue four weeks ago.

“He had a lovely run up here the first night and I think he has improved plenty from it,” said Shane Foley, winning rider.

He added on Jessica Harrington's victor: “He worked like a winner during the week and he's duly obliged.

“It was an okay race, it felt like the three of us picked up well. I'd say the other two horses aren't too bad either.

“We didn't go that fast and we sprinted a bit. I was keen to get a lead on him just to teach him a bit more. He's not man enough yet to go and do it himself.”

R. Coakley, rider of Easca Peasca trained by John M. Oxx, reported to the Clerk of the Scales that his mount got upset in the stalls.