One two for Elliott as Aramax wins nicely 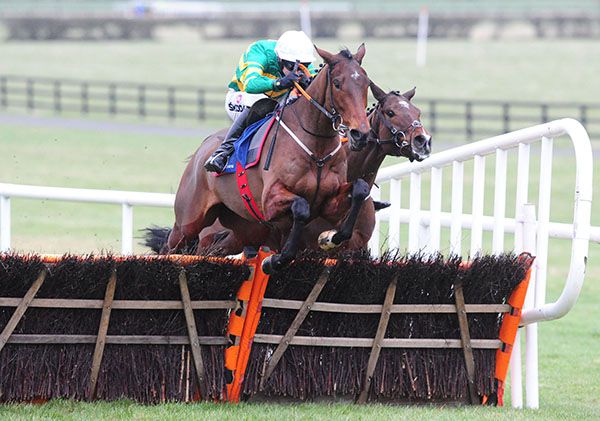 After a second and third placing in the previous race Gordon Elliott had the one two in the Ardstone Homes Supporting Kill GAA Rated Novice Hurdle at Naas, the J P McManus-owned Aramax (7/2) leading them home under Mark Walsh.

Aramax’s stable companion and eventual second placer, Recent Revelations, and Gin On Lime (10/11 favourite) were ahead of the winner in the betting.

There were mistakes from Gin On Lime (three out) and Recent Revelations (at the last) but it’s difficult to think that Aramax wouldn’t have prevailed, no matter what way things turned out.

That’s because the successful Maxios gelding went away at his ease up the run-in to triumph by eight lengths from Recent Revelations.

Pace-setter Gin On Lime kept on again to be a neck back in third.

“That was grand, it wasn't the strongest race in the world probably but it was nice to win it,” said Elliott.

“We'll try and find something small for him now. He's going the right way. He's not the worst horse in the world.”

Meanwhile Elliott had the following update on Tiger Roll - “He's in good form. If we're allowed into Punchestown tomorrow we'll give him a canter around after racing and then we'll go to Navan next week.

“He's nowhere near as fit as he was last year and this is a starting point for him.

“He's only back cantering since the first day of this year whereas last year he was going all season.

“He will come on from the run, he's not as fit as last year, but I hope I'm wrong. It's a stepping stone back to the National.”