Saltonstall brings up the hat-trick for McGuinness 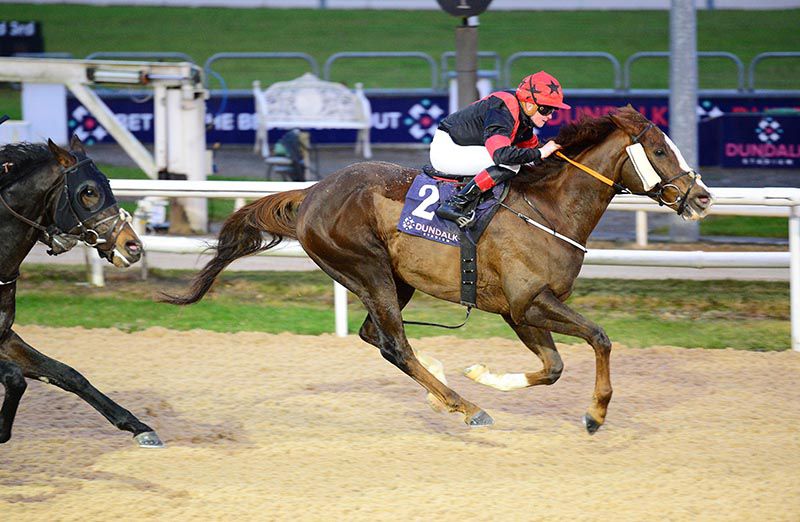 Saltonstall continued his upward trajectory by taking the scalp of odds-on favourite Romanised in the mile race at Dundalk.

This brought up a hat-trick of victories for Saltonstall after winning at Limerick and in Listed company at Naas.

Romanised (8/13f) missed the break to trail the field by five lengths but was soon able to tack on at the back alongside Saltonstall.

Former Irish 2,000 Guineas winner Romanised travelled strongly into a narrow lead over a furlong out.

However, when Billy Lee went for the whip in the final 150 yards the answer wasn't there. Saltonstall soon collared him and strode on well to win by three parts of a length at 9/4.

Romanised faded to third as Harpocrates got up for second at 14/1.

Trainer Ado McGuinness said: “I can't fight with the handicapper anymore anyway, that's for sure.

“We put him in this race by chance as he was going so well. People probably thought I was mad running him here after running in the mud but he'd been here a couple of times and he just floats on the surface.

“Sam (Ewing) was very good on him and it's great for everyone involved. That's his fourth win of the year and he'd just a superstar of a horse to have. I'm just thrilled to have him.

“He'll get a break now, he won't go travelling. Lingfield could be a possibility for him but I think we'll target stakes races on soft ground at the start of next season.

“I don't know about the Galway Mile next year, I'd want a 20lb claimer on him! It's a great problem to have with a horse.

“I'm praying to God that I can keep his form the way it is. He's just turned inside out with age and I'm delighted to have him.”

This was a first crack at all-weather racing for both Saltonstall and Romanised. The latter was using it as a prep race for a potential tilt at the Longines Hong Kong Mile before being retired to stud.