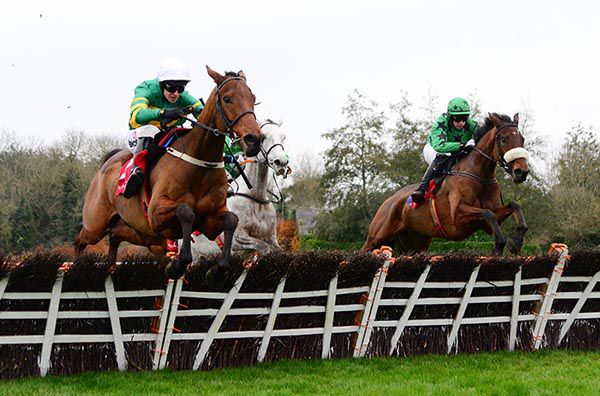 Blue Sari got off the mark over hurdles with a workmanlike victory in the Kildare Now Maiden Hurdle at Punchestown, to give trainer Willie Mullins a treble on the card.

Last year's Cheltenham bumper runner-up was sent off a 3/10 shot for the two-and-a-half mile contest and was prominent throughout under Mark Walsh.

The JP McManus-owned gelding was untidy when moving up to dispute two from home but moved nicely into the lead turning for home.

Walsh asked his mount for an effort on the run-in and he stuck on well to get the job done.

Ashdale Bob had come to chase him over the last but dived left on the run-in and it was The Bosses Oscar who stayed on best to get within half a length of the winner at the last with the same margin back to 50/1 shot Brinkley.

Mullins said:- “He jumped well but was very free early on. I’m happy that he will improve a fair bit from that, and he can come back in trip.

“The Royal Bond will probably come too quick so we might wait until Christmas. He looks a nice type and is only four.

“A faster run race over a shorter trip will suit him. He’s a nice ride at home and I’m looking forward to him for the season.”

Walsh added:- “I winged the first hurdle and I was upsides, I would have liked a bit of cover just to get him relaxed but it's job done and he's after winning his maiden. We can go on from it.

“I always had it and he'll come on a ton from the run. He was just getting a bit tired and idling in front but I was very happy with him.

“He'd have no problem coming back to two and he has the option of two-and-a-half.”