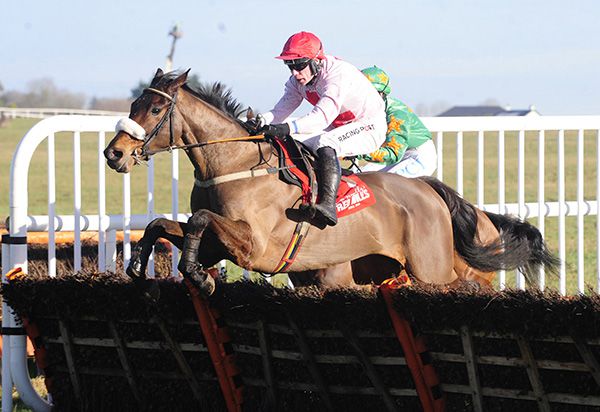 Arcadian Sunrise justified favourtism in the opener at Thurles this afternoon when staying on best to land the Red Mills Irish EBF Auction Maiden Hurdle.

Denis O'Regan settled in behind the leaders on John Queally's charge in the early stages of the race, run over just shy of two miles.

Whatsnotoknow travelled stylishly to take it up from the front-running Behind The Curtain after the second last, but Arcadian Sunrise, who had been ridden at the penultimate flight found plenty.

The Arcadio gelding got to the front before the last and galloped on strongly to record a half-length success over Whatsnotoknow.

The 5/2 winner (drifted from 5/4 in morning) had chased home impressive winner Saint Roi on his hurdling debut at Tramore on New Year's Day.

"There is a winners' auction race coming up somewhere and that's where he'll go. These auction races are a good idea for those type of horses,” said Queally.

"We bumped into one trying to give it ten pounds, at Tramore.

"We'll get through the next race before deciding on running in the Final at Punchestown."