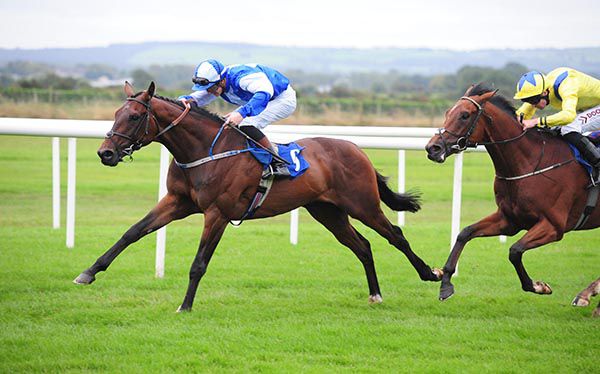 With two of his rivals running off the bend with a circuit to race Ben Coen was left in front on the Battle Of Marengo gelding.

More than one threatened danger to the victor up the straight but it was Formal Order that really put it to him. He was bidding to give Johnny Murtagh a double after his win in the feature with Winiata.

Takarengo wasn't for beating though, and a length and a quarter eventually split them.

They left Marwari all of eight lengths back in third.

Winning trainer Tom Mullins explained: “I thought the ground was going to be worse than that as I don’t think it’s heavy.

“It wasn’t a help when the two lads ran off the bend as the last thing this lad wants is to make his own running. We’ll try and sneak into a good handicap over a trip — a mile and six (furlongs) or two miles. At the moment he’s too low for the Cesarewitch.

“The first two came away well, and Ben said he kept pulling it out. The other horse came at him twice and he pulled out twice. He’d have no trouble over a longer trip.

“More than likely he will go hurdling.

“He was bought for 38,000 as a foal to go to the Orby but he nearly got killed in a field and had a lot of scars and marks on him. He was in a bad way and didn’t make it to the Sale so that’s why he’s with me. He’s still very immature.”

N.M. Crosse, rider of Spirit Of Dawn trained by H.Rogers, reported to the Clerk of Scales that his mount hung left throughout this race.