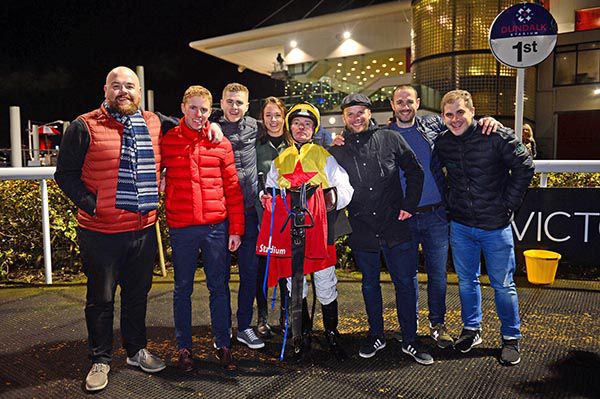 The Eyeroller Syndicate have an exciting prospect on their hands in the shape of the three-year-old daughter of Champs Elysees.

She got ten pounds for winning here four weeks back, but the market said she’d have no trouble with her new mark of 70 and so it proved.

Again with Seamie Heffernan in the plate 5/4 market-leader Tartlette bounded away at the business end to slam Taliyna by four and a half lengths.

“I'm delighted with that. I think we'll take our time with this one and see how we go with her,” said Crawley.

“She's doing everything right and we won't be in a hurry to run her. We'll freshen her up again and she'll tell us when she's ready to rock.

“She has a good pedigree so if we could make a broodmare out of her well and good.

“She's only a three-year-old filly and there might be a nice race in her.

“We'll have a long old summer next year, hopefully, all going well.”

S. Foley, rider of Pocotaligo (GB), trained by Adrian McGuinness, reported to the Stewards' Secretaries that his mount checked at the first bend but he was unable to apportion blame to any other rider.