Will Be King dominant in the claimer 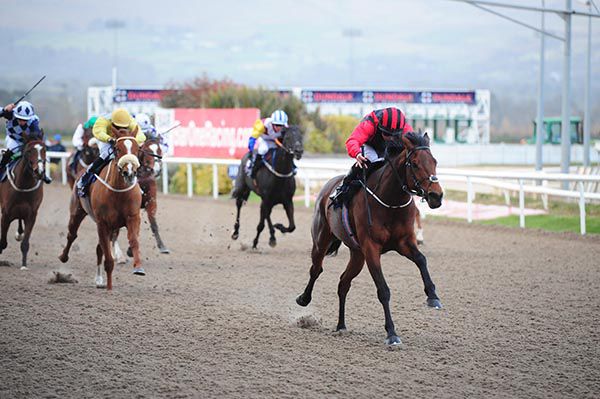 Will Be King wins under Shane Crosse
© Photo Healy Racing

Will Be King (6/4 favourite) stormed to a convincing four and a quarter length success in the View Restaurant At Dundalk Stadium Claiming Race.

Second market choice Lady De Vesci (5/2) got closest to the Joseph O’Brien-trained and Shane Crosse-ridden Will Be King, but there was no living with the victor once he took over a furlong and a half out and asserted a furlong down.

“He’s appreciated the step up in trip. He might not have seen out the mile and a half the last day but he loves travelling and passing horses,” said Crosse.

“When he won here over a mile for Dylan (Browne McMonagle) he really ran through the line and there is a nice race plan for him here over the winter.”

R. Coakley, rider of Goodwood Showman (GB) trained by Jarlath P.Fahey, reported to the Clerk of Scales that his mount burst a blood vessel.

The Irish Horseracing Regulatory Board Veterinary Officer examined Goodwood Showman (GB), trained by Jarlath P.Fahey, at the request of the Stewards and reported the animal to have had blood at his nostrils post race as a result of exercise induced pulmonary haemorrhage.

W.M. Lordan, rider of Spanish Dawn trained by John C. McConnell, reported to the Clerk of Scales that his mount leaned left off the bridle.