Winning start over the banks for Yanworth 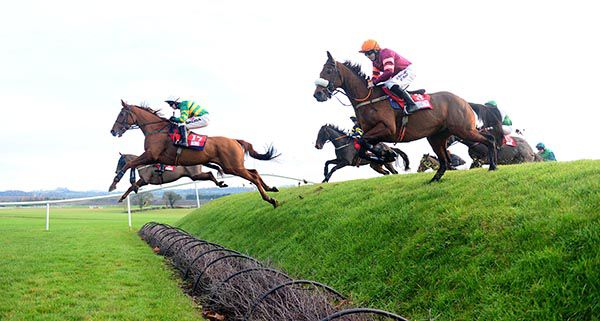 Former high-class hurdler and chaser Yanworth (2/1 in the morning, 11/8 into 5/6 fav on course) made a winning start in cross-country chases when landing the EMS Copiers Risk Of Thunder Steeplechase in the hands of Mark Walsh.

The nine-year-old was always prominent, took over on the run to the final hurdle and, despite idling a bit in front, kept on well to score by a length and a half from another banks newcomer Neverushacon (12/1) with last season’s La Touche winner Ballyboker Bridge (11/1) running a fine race in third another two and a quarter lengths away.

The former Alan King-trained winner was a twelve-time winner for his previous handler, including the 2016 Christmas Hurdle at Kempton and the 2017 Ryanair Stayers Liverpool Hurdle at Aintree.

The winner had his first outing in Ireland in a hurdle race at the Listowel Festival where he was pulled up, and had actually travelled to Cheltenham during the week with the intention of running there only to be re-routed to make his banks debut at Punchestown.

"He had a small disadvantage as he went to Cheltenham on Wednesday, said winning trainer Enda Bolger, and he got back on Friday evening.

"I was just scared when we were in Cheltenham with the amount of rain and whether the cross country would go ahead or not.

“It’s his first time around here and he should improve a lot. He jumped well and had his ears pricked coming up the straight.

“It was a proper race and was no cake walk. He’ll probably go to Cheltenham in December. The fact that is a handicap he might struggle but we are trying to make him for the spring race in Cheltenham which is a conditions race.

“It’s a good while since he won a race and you never really know if they will take to this until you run them.”

Betfair go 6/1 (from 20/1) for the Cross Country Chase at the Cheltenham Festival.