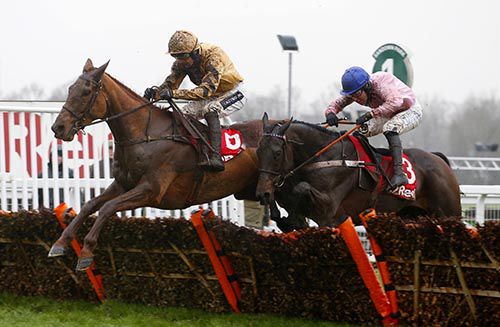 The Graham Wylie-owned six-year-old, who has been switched from yesterday's Supreme Novices' Hurdle, won the Grade One Tolworth Hurdle at Sandown on only his second start over timber.

That race was over two miles but was run on heavy ground and he showed two and a half miles held no fears as he had romped home at Punchestown in December.

"He is a very exciting horse. He had two bumper runs last season, winning both without too much fuss, and his hurdling career has continued in that vein," said Mullins.

"He was very impressive in the Tolworth. The ground was heavy that day, but I am convinced he is a better horse on better ground. I have been happy with him at two miles and his pedigree suggests he can go out to three miles. He is a point-to-point winner but he's sharp.

"He has had two runs over hurdles and two wins, including a Grade One. And the horse who finished third came out and won the Betfair Hurdle."

Mullins fields a formidable supporting team in the shape of A Toi Phil, Bello Conti and Thomas Hobson.

The latter was a useful handicapper on the Flat for John Gosden and put up a good performance to beat stable companion Open Eagle in the Grade Two Leamington Novices' Hurdle at Warwick in January.

A Toi Phil has won his last two starts at Leopardstown, while Bello Conti struck on his only start over jumps so far at Clonmel in December.

There is a fifth Irish raider in Vigil, who has finished fifth in the Champion Bumper for the last two years.

Dermot Weld's six-year-old has just had two races over hurdles and after taking third place behind A Toi Phil at Leopardstown, he opened his account at Naas last month.

Alan King is bullish about Yanworth as JP McManus's exciting prospect bids for a five-timer.

King has made no secret of how highly he rates Yanworth, who has come on in leaps and bounds switching to hurdling after finishing fourth in last year's Champion Bumper.

After landing his first two novice hurdles at prohibitive odds at Exeter and Warwick, Yanworth was again a very short price as he trotted up in the Grade Two Kennel Gate Novices' Hurdle at Ascot. Impressive though those victories were, Yanworth stepped up another gear when beating a strong field with consummate ease over an extended two and a half miles in the Classic Novices' Hurdle at Cheltenham on Festival Trials' Day.

"We have brought him along steadily, and then when we stepped him up to Grade Two company on Trials Day at Cheltenham in January, he produced a phenomenal performance against quality opposition," the Barbury Castle handler told www.alankingracing.co.uk.

"He had done everything we asked of him over two miles, but bumper horses usually stay and we always felt that he would be even better when we moved up in distance.

"The ground was really testing that day, but he was always travelling and could not have been more impressive. He has speed and stamina, and we are looking forward to it."